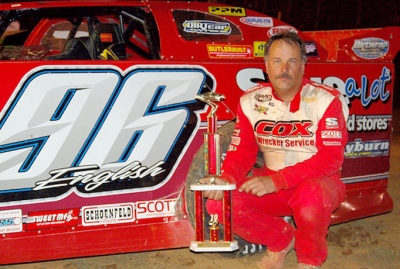 First, the Benton, Ky., driver lowered the 11-year-old track record at the quarter-mile oval with a fast qualifying lap of 12.508 seconds. Then, he put his polesitting car out front and never looked back en route to a $3,000 payday in Duck River's 40-lap memorial race.

English won ahead of Jeff Watson, of Campbellsville, Ky., and Anthony Burroughs, of Muscle Shoals, Ala. Decatur, Ala.’s Mark Mears was fourth, with Tony Morris, of Murfreesboro, Tenn., fifth.

In qualifying, English was the first car out on the track and he promptly put his personal stamp in the Duck River Speedway record books. His first lap was fast, but his second was quicker as he lowered the previous track record by eight-hundredths of a second.

“It surprised me really,” said English of the quick lap. “I really didn’t think that I made a very good lap. But the track was hooked up and the cushion was still pretty low then. And going out early helped.”

Jay Brinkley of Raus, Tenn., had owned the track record since turning a 12.58-second lap in 1999. Brinkley, a Duck River Speedway regular who cut his teeth racing at the tiny middle Tennessee bullring, wasn’t on hand to defend his record. But 28 other drivers tried and none even came within a half second of English. In fact, no one else managed to get below the 13-second mark. Josh Putnam, of Killen, Ala., who went out early in the second group and 10th overall, tripped the clock at 13.042 seconds.

English was hardly challenged in the race itself as well. After three separate wrecks before a full lap could be completed, track officials lined the cars up for a single-file start. English got solid starts on the first two tries, but fellow front-row starter Putnam was able to edge ahead on the third.

“I think he kind of jumped the start the third time, but I think I could have gotten back by him,” English said.

Once the cars were lined up nose to tail, however, it didn’t matter — English was gone. Though English never ran away from Putnam or Watson, no one had enough to challenge the leader. Watson shuffled Putnam back to third by lap 27. Six laps later, Putnam slowed and pulled to the infield, handing Burroughs the third spot.

Notes: English’s C.J. Rayburn Race Car was powered by an engine from Tommy’s Machine Shop. It carried sponsorship from Seay Motors, Sav-a-lot Food Stores, AAA Fence Inc., Wiles Racing Driveshafts and Renegade Race Fuels. … It took awhile to get the race started after a spin by David Gentry and a spin by Clint Nichols forced complete restarts. The third attempt was disastrous as seventh-starting Mike Walker spun in front of the field and collected nine cars. Walker had a left front flat and didn’t return, while Shannon Davis and Corey Holmes suffered the worst damage. Davis left on the hook and Holmes made two laps before calling it a night. … English had little trouble negotiating lapped traffic, but there was a bottle neck from fourth place on back that eventually eliminated heat race winner Corey Posey who was running seventh at the time. Posey was tiptoeing through traffic when he was drilled from behind by Mark Haddon. The contact bent Posey’s upper A-arm and ended his night early. “Everybody was checking up to keep from wrecking. That’s how (Haddon) caught us. I guess he was trying to pass the whole damn pile by running over us,” Posey said of the incident. … There were 13 cars running at the finish. Tommy Taylor had a solid top-10 end on the white flag lap when he coasted to a stop with rear-end trouble. He was credited with 14th. … Jeff Walker started 24th and took advantage of the attrition to finish 10th. … Last year's track champion Scott Cook did the same. He was added as a provisional starter after losing the driveshaft from his car in practice. Cook missed qualifying and heats, but repaired the car in time for the feature, started 25th, and finished 11th. … Kelly Hanvey was piloting the No. 6 Fox Racing entry after losing the powerplant in his own car at the Magnolia 100 last month. His night ended early, as he was the third driver to exit. … David Earl Gentry had a bad qualifying run and finished just third in his heat, but he used the cushion on the topside to drive from 15th to sixth in the feature. … The race was run as a combined Memorial Event in memory of Moe Harrison, Brad Seals, Brad Epperson and Toni Daniels.