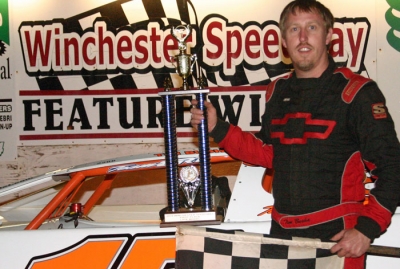 Tim Busha picked up a $3,000 victory at Winchester. (Carla Gault)

WINCHESTER, Tenn. (Oct. 2) — Tim Busha started from the pole and led every lap of the $3,000-to-win special event at Winchester Speedway Saturday night. The Boaz, Ala., driver was fast from onset as he set fast time in his group and was never challenged in the feature.

He raced comfortably ahead of Killen, Ala., driver Josh Putnam and enjoyed a lead from four to five lengths up to a half straightaway at times.

Putnam finished second, with eighth-starting Randy Weaver of Crossville, Tenn., third and Shannon Davis, of Estill Springs, Tenn., fourth. Brandon King, of Decatur, Ala., finished fifth. Busha said that although he didn’t know where his closest competitor was, he never felt threatened during the 40-lapper.

“Without racing any radios or mirrors … and I don’t have a spotter like some of these guys do, I didn’t really know how (far ahead) I was,” Busha said. “I knew my car was good in (turns) one and two and I guess I was better than they were in turns three and four.

“When you’re out there in the lead, you hear every crack and pop. I sure didn’t want to see that caution with three laps to go.”

The lap-37 caution — the fifth of the night — came when the cars of Jerry Ashley, Corey Posey, Daniel Miller and David Seibers got together in turn three. Seibers ended up off the track in the melee, while the other three were stacked together. Ashley and Seibers both retired from the race.

Despite the late caution, Putnam still never managed to make a run at Busha. The three lap dash to the checkers was hardly a problem for the race leader. He jumped back in front by three lengths and motored unchallenged to the checkers.

Notes: Busha’s GRT Race Car is powered by a RaceTek spec engine and carries sponsorship from Kilpatrick Chevrolet, Pierson Chevrolet and Stealth Carburetors. … The victory was Busha’s 10th of the season. He has nine Super Late Model wins and one Crate Late Model win, which came at the Ice Bowl at his home track, Talladega Short Track. … The race was the first special event at Winchester’s historic 1/3-mile oval since current promoter Jimmy Nowlin took over in June. The track sat idle for more than a year after a bank foreclosure in 2009. … Among those failing to make the main event included William Thomas, Kayne Hickman, Caleb Ashby, Joey Mack, former track champions Jeff Walker and David Brannon; also former Richard Childress Racing driver and Winchester native Ryan Gifford. … Thomas pulled his Brett Wyatt-owned car to the pits while running in mid-pack in his heat race. … James Cline made an impressive 13th-to-sixth run. … Anthony Burroughs started third and was running third when he took a detour off track to avoid a wreck involving lapped cars on lap 12. He restarted in third, but immediately pulled to the infield on the start and didn’t return. His sudden turn into the infield on the frontstretch brought out the second caution. … Busha had a half straight lead on lap 35. … Randy Gifford was driving a back-up car belonging to Jerry Ashley. Both are former Winchester Speedway track champions as well. … There were 15 cars running at the finish. … Qualifying was done in four groups with the top three qualifiers from each group locked into the feature. The fastest qualifiers in each group were Busha, Putnam, Burroughs and Josh Johnson.