Clanton gets recharge in $3,000 victory at Dixie 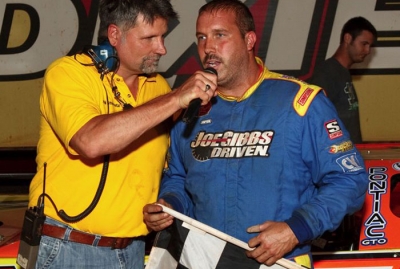 Shane Clanton tells the Dixie crowd about his victory. (praterphoto.com)

WOODSTOCK, Ga. (June 5) – Shane Clanton may not have performed quite up to his usual standards so far in 2010, but he showed no signs of a slump when he paid a visit to his home track Saturday night. Clanton of Locust Grove, Ga., was dominant at Dixie Speedway, leading every lap on his way to winning the Bill Ingram Memorial. | Lee Sutton feature | Slideshow

“I always like to come race here at Dixie when I get the chance,” said Clanton, who earned $3,000 for the unsanctioned victory. “This is the place where I cut my teeth and really learned to race. It feels good to finally get another win under my belt, especially here in front of my home-track fans.”

Clanton jumped to the lead on the start of the 35-lap race over third-starting Tony Knowles of Tyron, Ga., while Frank Ingram of Woodstock, Ga., fell to third from the out-side pole. Knowles hung with Clanton until a caution slowed the field on the fourth lap. After the restart, the race went green for 26 laps, during which Clanton pulled to nearly a straightaway lead over Knowles.

Even lapped traffic didn’t slow down the determined Clanton, a regular on the World of Outlaws Late Model Series. He passed slower cars both high and low, never allowing Knowles to make up any ground.

Clanton’s lead was finally erased by a lap-30 caution. A series of cautions followed, giving Knowles plenty of restarts to attempt to challenge Clanton. Instead, Knowles received a challenge from Ingram.

“It was a good race,” Clanton said. “The track was good and the guys gave me a car that was perfect for it. Bill (Ingram) and my dad raced a lot back in the day, so I’m really happy to win this race in honor of him.”

For Frank Ingram, it was another strong run in the race that honors his father. He won the race for the first time in 2009.

“Winning this race last year was really special for me,” Ingram said. “Obviously, I would have loved to have won it again, but it was still a good run and I’m happy with it.”

While battling in the closing laps, Ingram and Knowles made contact a number of times. The two drivers had a private discussion following the race, after which both drivers said the issue was settled. Knowles blamed the contact on Dixie’s lineup procedures for double-file restarts.

“I don’t think it’s a very smart rule they use here for the restarts,” Knowles said. “They automatically make the second-place man go to the bottom. I was running second and I wanted the top. Frank wanted the bottom, but the track wouldn’t let us switch and we ended up running over each other.

“It was still a good third-place run, and we’ll take it. We had a good car tonight, just missed a little bit on the setup for the feature.”

Notes: Clanton’s Rocket Chassis is owned by Ronnie and Janice Dobbins and is sponsored by RSD Enterprises. … Instead of his familiar No. F9, Ingram piloted a No. 24 owned by Buster Goss of Rome, Ga. Ingram has drove Goss’s car to two victories this year at Dixie. … Lee Sutton won the two previous races at Dixie and lowered the track record May 15, but he missed Saturday’s race after having mechanical problems in hot laps.