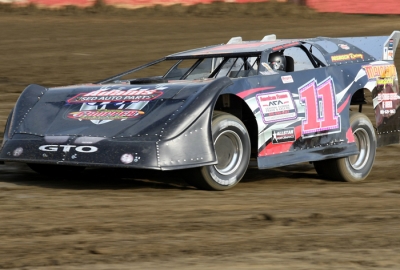 GIBSONTON, Fla. (May 15) — Frequent East Bay Raceway Park visitor Doug Horton of Bruceton Mills, W.Va., made a trip to Florida pay off Saturday with a $3,800 victory in the Scott Thompson Memorial at the third-mile oval near Tampa. The outside front-row starter, driving a Late Model owned by Ken and Diane Nosbisch, led flag-to-flag for the unsanctioned victory. | Slideshow | East Bay weekly results

Tampa's David Schmauss finished second followed by Josh Peacock of Dover, Fla., Bryan Bernhardt of Clearwater, Fla., and Doug Watson of Lithia, Fla. Devin Dixon of Apollo Beach, Fla., crossed the finish line in second but was disqualified for weighing in too light.

Horton outgunned polesitter Mark Whitener of Middleburg, Fla., for the early lead and set a torrid pace, entering lapped traffic after a dozen circuits. After a caution gave him clear racetrack, Horton stayed in control while Dixon and Shan Smith battled for second.

Horton avoided traffic again when Jeff Mathews lost an engine on lap 23, bringing out another yellow. On a lap-30 restart, Smith and Dixon tangled, triggering an accident that knocked Ivedent Lloyd Jr. out of the race after he rallied from the tail into the top five. Smith also suffered, stopping with a flat tire on the next restart.

Whitener retired in the final laps while Horton completed his victory in the 50-lap event that honors a racer killed in a 2006 highway accident.

Notes: The night's racing was sponsored by Air Gas. ... East Bay's Late Model division is sponsored by Racecar Engineering. ... Ivedent Lloyd Jr. of Ocala, Fla., won a heat race and should've started up front, but he failed tech inspection following the heat and had to run a consolation race; he started 23rd in the main event.