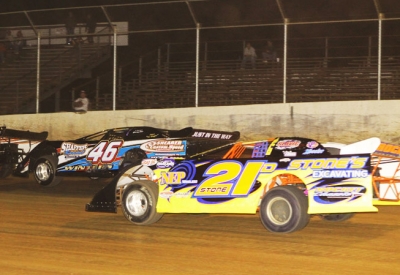 “This has to my No. 1 win," Winters said of his 23rd career victory. ”It’s great to get a big win like this, especially driving Tex Shaffer’s car. He‘s been a great guy to drive for.”

Winters kept Andy Anderson of Martinsburg, W.Va., Ronnie DeHaven Jr. of Winchester, Va., and 11th-starting Dan Stone of Thompson, Pa., in check through three cautions over the first 25 laps, then benefitted from a lap-37 caution that erased a pass by Stone amid traffic. Winters crossed the finish line less than a second ahead of Stone while DeHaven finished third. Frankie Plessinger of Big Cove Tannery, Pa., advanced 12 positions to finish fourth and Al Shawver Jr. of Hampstead, Md., rounded out the top five in the unsanctioned event. Anderson was disqualified for throwing his helmet at Roy Deese Jr.'s car after they touch on a lap-11 restart and placed last in the 24-car field.

“Boy, that was a long 50 laps,” Winters said. “Those cautions fell just at the right time because my tires were getting hot. They would cool them down. The last time I saw Dan pull up alongside, I thought I was in trouble.”

At the outset of the race, Winters powered to the lead over Anderson on the outside as Bob Dunn and track champ Roy Deese Jr. battled for third until lap 11 when the caution came out. Anderson and Deese touched on the restart as Anderson spun into turn one with the seventh-starting DeHaven, Stone and Shawver moving up to give chase. Stone took second following a lap-16 restart while three-time race winner Gary Stuhler battled with Shawver until Plessinger got by both following a lap-21 restart.

Winters continued to hold the advantage over Stone by more than a second until catching traffic on lap 34 as Stone closed in. Stone slipped by Winters, but four-time Hub City winner Jeremy Miller of Gettysburg, Pa., had the suspension break on his car on lap 37 while running ninth to draw a yellow.

Winters edged away after the caution and Stone couldn't make the pass after the frontrunners entered traffic in the final laps.