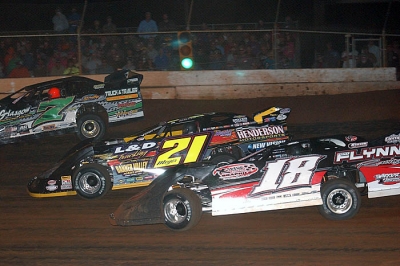 But after struggling through a frustrating slump for much of the past five months, winning Saturday’s 100-lap feature was just what the 53-year-old Batesville, Ark., driver needed to get his racing program back on track.

Debuting a brand new Victory Circle Race Car, the pole-starting Moyer led all 100 laps at the third-mile oval and survived two close calls in slower traffic on his way to topping home-state drivers Bub McCool of Vicksburg and Eric Cooley of Fulton, for a slump-busting victory worth $20,011. Hometown driver Brian Rickman was fourth with Morgan Bagley of Longview, Texas, rounding out the top five finishers.

“We’ve been down a bit here lately and just haven’t run like what we want to. We’ve been decent, but we just felt like we needed to run better,” said Moyer, who’s failed to match his lofty Hall-of-Fame standards this season while struggling for the most part in major events. “To come down here and win, it feels good to get one of these big races.”

Moyer had the dominant car for the majority of the race, which saw six of the top 12 starters knocked out by an early pileup that was caused when outside-front-row starter Neil Baggett of Shannon, Miss., tagged the wall in turn two.

As dominant as he was, Moyer had to work plenty hard to earn the victory. He successfully turned back challenges from both Ronny Lee Hollingsworth of Northport, Ala., and McCool, but his most difficult task was to avoid wrecking in slower traffic.

Both Hollingsworth and McCool had closed in on Moyer when traffic first came into play just past the halfway point of the race. The three drivers were racing just a few car lengths apart on lap 58 when Klint Byars of Carrollton, Miss., slowed to exit the racetrack in turn two, blocking the high line Moyer was running.

Moyer nearly spun to avoid hitting Byars, causing both Hollingsworth and McCool to slide into him. All three drivers corrected their race cars and continued on with Hollingsworth, who was sandwiched between Moyer and McCool, suffering the worst of the damage from the nearly disastrous incident.

While Hollingsworth faded, McCool remained within striking distance of the leader and had once again closed in by lap 80 as Moyer struggled to lap the slower car of hometown driver Jay Burchfield. The leaders had to again take evasive action to avoid wrecking when Burchfield went for spin directly in front of Moyer and McCool in the middle of turns one and two.

“It was scary a couple different times,” said Moyer, who worried throughout the second half of the race that the lap-58 contact may have pushed a body panel in on one of his tires. “I didn’t feel like I hit anything hard with the wheels, I just knew something on the body might be on the tire. I was just hoping there wasn’t a tire rub or anything.”

Fortunately for Moyer, all four of his tires were clear of sheet metal, and the caution for Burchfield’s spin gave him the clear track he needed to cruise to the finish.

He easily pulled away from McCool on the restart and opened up nearly a straightaway advantage in the closing laps. Moyer again caught the tail end of the field with just a few laps remaining, but his comfortable lead allowed him to ride behind the slower cars as he raced to the victory.

“I didn’t really want to get up there and risk getting caught up in something again,” Moyer said of his frustrating encounters with slower traffic. “I guess we were lucky not to get wrecked there a couple times, but sometimes you need things to go your way. I guess we had some things go our way tonight.”

McCool, 34, started fourth and settled for the runner-up finish after running in the top five for the entire race. The strong run gave McCool his best Magnolia State 100 finish, but he thought he could have come away with the victory if he hadn’t been hampered by damage caused by the lap-58 contact.

“Right there at the end, I don’t know if I could have gotten around him,” said McCool, who drives a Victory Circle from Moyer’s shop. “Before we got in that little tangle-up down there, I felt like we were getting better and better. Then we got into it and it bent the right-front down into the ground and just got tight.

“It’s a little disappointing because we felt like we had a car we could win with, but we’re happy with second-place here against these guys.”

Making his first Magnolia State 100 start, the 20-year-old Cooley capitalized on the race’s high attrition rate to enter the top five early. After moving to third in the closing laps, the low-running Cooley, who also drives a Victory Circle from Moyer’s shop, made a brief challenge for the second spot in the closing laps, but fell short in claiming the third-place finish.

“To finish third here in this race, it’s pretty big for our program,” said Cooley, the 2009 NeSmith Crate Late Model Series champion who’s in his first full year of Super Late Model competition. “We kinda survived there with all that was going on, but to get up there and run third against these guys, I’m happy with that for sure.”

Rickman quietly advanced from the 21st starting position to record the fourth-place finish in what was also his first time Magnolia State 100 start.

Bagley, a Super Late Model rookie making his debut at Columbus, needed a victory in the last-chance race to qualify for the main event. He was caught in the 12-car pileup early in the race, but still moved to the front even with heavy cosmetic damage to the rear of his race car. He ran as high as third before fading to fifth at the finish.

Hollingsworth faded out of contention after the lap-58 incident. He was running just outside the top five with less than 10 laps remaining when suspension issues sent him to the pit area. He was 11th in the final rundown.

Notes: Moyer’s Victory Circle is powered by a Clements Racing Engine with sponsorship from L&D Trucking, Henderson Motorsports, Banner Valley Hauling and Minx Show Palace. ... The race was slowed by 11 cautions; five occurred in the race’s first 10 laps. ... Ten cars were running at the finish with eight cars on the lead lap. ... Among drivers knocked out by the early pileup: Neil Baggett, Shane Clanton, Chris Wall, Wendell Wallace, Mike Marlar, Rodney Wing, Clint Smith. ... The races top four starters were all in Victory Circle Race Cars. ... Moyer’s most recent Magnolia State 100 victory came in 2002. ... Moyer is eligible for $10,000 bonus if he can also win Whynot (Miss.) Motorsports Park’s Fall Classic on Oct. 21-22 and the Southern Belle Cotton Pickin’ 100 at Columbus’s other track, Magnolia Motor Speedway, on Oct. 28-29. Moyer finished second in both of the $15,000-to-win events in 2010.