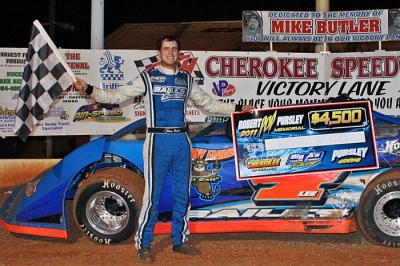 Ross Bailes earned $4,500 for his victory in the Robert Pursley Memorial. (Kelli Norris)

Bailes, who won Tuesday night’s Shrine 100 at nearby Carolina Speedway in Gastonia, N.C., led every lap of Friday’s feature, but had to turn back multiple challenges in the process. He fought off an early charge from Ricky Weeks of Rutherfordton, N.C., and later turned back Johnny Pursley of Clover, S.C., on his way to scoring the fourth overall Super Late Model victory of his career. Slideshow

"Winning the Pop Pursley Memorial is a big deal for me,” Bailes said following his victory. “I grew up knowing Mr. Pursley and the whole Pursley family. We all are from right there in Clover and our families have raced together over the years so it's a real special race to win for me personally.”

Bailes, 21, piloted the Bobby and Johnny Wilson-owned no. B4 machine to the victory. The combination came about in a mid-season deal that merged Bailes’s own program with the Wilson’s.

“We had a great car and I just can't thank Bobby and Johnny Wilson enough for giving such good equipment,” Bailes said. “We took our team and added it to theirs and it is worked really well. I want to thank all of the guys that work so hard on our cars and stand behind me every week."

Weeks gave Bailes his most serious challenge on a lap-22 restart. Weeks used a high-side move to pull ahead for the top spot exiting turn two, but his move was nullified by a caution caused by five-car pileup.

After moving back out front for the ensuing restart, Bailes did not allow Weeks another chance to steal the lead. The young racer took notice of the veteran’s move and he did not intend to make that mistake again.

“On that restart he went up high and drove by me. Luckily the caution came out,” Bailes said. “That kind of told me that there was a lot of grip there that I didn’t think was there. I drove it in a little bit deeper the next time and it stuck.”

While Bailes stretched out a comfortable five-car-length lead, Pursley moved by Weeks for the second position. Pursley, who is the grandson of the race’s namesake, reeled in Bailes in the closing laps, but only got as close a car length as Bailes scored the victory.

Pursley settled for the runner-up finish while Weeks held on for third. Chris Ferguson of Mount Holly, N.C., was fourth with Casey Roberts of Toccoa, Ga., rounding out the top five.

Notes: Bailes MasterSbilt Race Car is powered by a Clements Race Engine with sponsorship by Professional Restoration, Felony Farms, Bailes Construction, Carolina Fire and Security, KELCAR Motorsports, Swiftco Supply and Blue Eagle Transport. ... Bailes’s Shrine 100 victory Tuesday night paid $3,000. ... Bailes also recorded an Ultimate Super Late Model Series victory earlier this summer at Laurens County Speedway. ... The event was delayed by multiple rain storms and ran late into Saturday morning. ... Bubba Russell was among the drivers involved in the lap-22 pileup that nullified Weeks’s pass for the lead. Russell was transported off the racetrack in an ambulance, reportedly sustaining a collarbone injury. ... Cherokee Speedway has three more special events on its schedule with a $5,000-to-win Ultimate Series race on Sept. 4 up next.