Birkhofer nabs another $15,000 in Mississippi 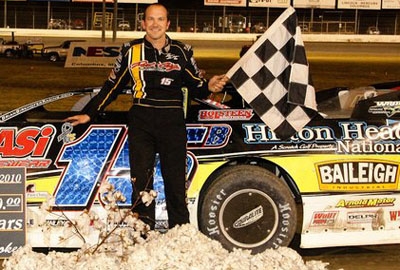 After starting the feature from the eighth position, Birkhofer overtook second-starting Mike Marlar of Winfield, Tenn., on lap 58 and went on to lead the remainder of the unsanctioned race.

“We just seem to run good down here,” said Birkhofer of his success in Mississippi. “It’s definitely been a great trip for us and it’s a great way for us to cap off the season. We’ve worked so hard all year to get things going in the right direction and to win a couple races like this really feels good.”

Marlar looked to have the car to beat during the first half of the race. After pulling to the lead over polesitter Ronny Lee Hollingsworth of Northport, Ala., and Shane Clanton of Locust Grove, Ga., on the start, Marlar opened nearly a straightaway lead as he began to lap slower cars.

After moving into the second position by lap 18, Birkhofer first looked to challenge Marlar on lap 30 as the pair raced through heavy traffic. But when they cleared the group of slower cars, Marlar again pulled to a comfortable lead.

Marlar lapped up to seventh by the halfway point, but soon Birkhofer was back in the picture. Birkhofer first looked under Marlar on lap 52, and pulled ahead for the lead six laps later. Birkhofer began to pull away from Marlar on his way to lapping up to the fifth position, but his pace was slowed when Scott Bloomquist of Mooresburg, Tenn., stopped in turn four on lap 70 and brought out the race’s only caution.

On the restart, Birkhofer had to hold off a brief challenge from 10th-starting Billy Moyer, who also pressured Birkhofer late at Whynot before settling for the runner-up finish. But Moyer of Batesville, Ark., didn’t have enough, as Birkhofer pulled away and Marlar went back by for the second position.

Birkhofer cruised from that point, putting plenty of slower cars between himself and Marlar as he held tight to the bottom groove of the racetrack on his way to earning the win.

“The biggest (concern) was when Billy Moyer was lined up behind me,” Birkhofer said. “With him and Marlar there was some great competition out there. I felt like that if I hit my line right I was a little quicker than those guys. I could get up and run that momentum line a little bit, but I felt like I was trying too hard. I ran a few laps up there, but I moved back down and thought it was better on the bottom.”

Marlar, who made another late-season start in the Warrior Race Cars house car, held on for second to score another strong finish in a big-purse Mississippi race.

“I felt like I might have been a touch better than him, but we got in that traffic and there was more traffic in my line than his,” said Marlar, who earned $25,000 last month at Columbus Speedway's Magnolia State 100 and finished sixth at Whynot. “His car was better low and I was really better out in the middle of the racetrack. And lapped traffic was more in the middle than the bottom.”

Clanton slipped by Moyer late in the race to earn the third-place finish. Moyer finished fourth while David Breazeale of Four Corners, Miss., finished fifth, the first car one lap down.

Birkhofer’s victory came after he escaped what could have been a major setback during Friday night’s preliminary action. An oil leak from Birkhofer’s engine caused his race car to trail smoke the entire distance of his heat race. His car finally lost power completely on the final lap, but he was able to coast across the finish line for a second-place finish. He and his crew worked most of the day Saturday to swap engines for the feature race.

“Right now I’m kind of in awe. We worked our tails off last night just to get all the oil off so we could load it and we changed motors today,” Birkhofer said. “It’s been a rough couple of nights in that category, but when you walk out of this place with all the money against the caliber of guys that were here, it’s a great feeling.”

Notes: Birkhofer’s MB Customs chassis has a Pro Power engine and is sponsored by J&J Steel, Hilton Head National and Zens Flooring. ... The event drew 73 Super Late Models. ... Only the top four cars finished on the lead lap and all cars 10th on back were two or more laps down. ... Of five drivers running the GM CT525 crate engine, Ronnie Johnson was the only driver to make the feature. He finished 16th. ... Johnson also earned $2,500 for winning the night’s Crate Late Model feature.