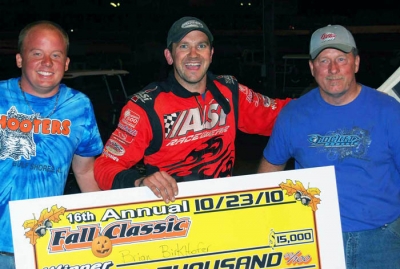 MERIDIAN, Miss. (Oct. 23) — In 2008 Brian Birkhofer made his first visit to Whynot Motorsports Park and took the Coors Light Fall Classic winner’s check back to Muscatine, Iowa. Birkhofer didn’t return to Whynot for the 2009 edition of the event, but when he came back for this year’s 16th annual Fall Classic, he picked up right where he left off two years ago. | Notebook | Prelims | Slideshow | Video

After winning his heat race Friday night, Birkhofer was once again in Whynot’s victory lane Saturday night after winning the $15,000-to-win, 100-lap Fall Classic feature. Birkhofer passed Chris Wall of Springfield, La., with 42 laps remaining and held off Billy Moyer of Batesville, Ark., in the race’s final stages to earn the $15,000 payday and become only the second two-time winner of the unsanctioned event.

After the race, an excited Birkhofer was happy to have outdueled a driver who has had one of the best seasons in recent Dirt Late Model history.

“People don’t understand how hard it is to look up at the scoreboard and see (Moyer) on your butt,” Birkhofer said. “With the year he’s had, I drove my tail off that last 30 laps. He’s a great driver, a great person and great for the sport. It was fun to hold him off.”

A smooth and wide racing surface provided multiple racing grooves, and drivers used all of them. Mike Marlar of Winfield, Tenn., took the early lead from the outside pole. Marlar quickly opened up a straightaway lead using the high side of the racetrack, while pole-starting Chris Wall and Don O’Neal, who was driving Wall’s backup car, battled side-by-side for the second position.

O’Neal finally cleared Wall for second on a lap-14 restart and set his sights on Marlar. After slipping back a few positions from his third-place starting position, Birkhofer also moved around Wall for third on lap 17 and made it a three car battle for the lead.

The race’s first lead change came on lap 25, when O’Neal overtook Marlar amid lapped traffic. While O’Neal began to pull away, Marlar, Birkhofer and Wall began to battle for second. The drivers went three-wide a number of times before Birkhofer took control of the position and began to close the gap on O’Neal.

Birkhofer took the lead on lap 35, but it was negated when the caution waved for the spinning Dane Dacus before the lap was completed. Birkhofer would have to wait to make another run for the top spot, as Marlar again used the high side to power from fourth to first on the restart.

Wall followed Marlar to move to the second position, then went by Marlar on lap 42 to begin his turn at the front. Wall looked to be in control at the race’s halfway point, but by lap 55 Birkhofer was back in the mix.

Birkhofer finally took the lead on lap 62 with a high-side pass of Wall that proved to be the winning move. By the time the race’s final caution waved on lap 74, the seventh-starting Moyer had worked his way to second. Moyer looked under Birkhofer on the restart, but didn’t have enough momentum to pull alongside.

That was as close as Moyer would get to the lead. Birkhofer pulled to a straightaway advantage as the race entered its final stages. Moyer closed the gap to a few car lengths when Birkhofer encountered slower traffic in the final five laps, but it wasn’t enough as Birkhofer led to the finish.

“I kind of fell back and forth there,” Birkhofer said of the jostling for position among the leaders. “When Chris Wall got the lead, I moved up and found the streak in the middle. My car was getting pretty balanced and I was like 'All right, this is where I got to be.' I figured if I just ran that line it would take Moyer having a pretty good car to pass me.”

The race played out just as Moyer had hoped, but he did not have a car good enough to pass Birkhofer. That was partly because his front suspension was damaged in a mid-race scrape with one of the tractor tires that line the infield of the racetrack.

“I was just biding my time there,” Moyer said of his patient move toward the front. “They were getting awful racy there at the beginning. Brian could run the top and the bottom and was moving all around. Some of those other guys were too. I kind of just stayed with my game plan there around the bottom, just waiting for the time to go. But I hit the tractor tire getting into three and bent the front end. He had the best car tonight, so we’ll take second.”

Wall held on for the third-place finish with Marlar claiming fourth. Dale McDowell of Chickamauga, Ga., made a late-race charge from mid-pack to finish fifth.

Notes: Birkhofer’s MB Customs chassis has a Pro Power engine and is sponsored by J&J Steel, Hilton Head National and Zens Flooring. ... The race was slowed by five cautions and there were a total of four lead changes among four drivers. ... Birkhofer joins Jim McDuffie of Meridian, Miss., as the only drivers to win the Fall Classic multiple times. McDuffie won the event in 1999 and 2003. ... O’Neal faded to a 10th-place finish after making contact with one of the infield tractor tires late in the race. ... Last year’s Fall Classic winner Ronny Lee Hollingsworth of Northport, Ala., briefly moved into the top five late in the race, but faded to a seventh-place finish. ... Making his first start at Whynot Motorsports Park, Scott Bloomquist of Mooresburg, Tenn., finished eighth. ... Jimmy Mars of Menomonie, Wis., advanced from 17th to sixth to earn the race’s hard charger award. Mars’ prize was a nifty handmade knife and case from the award’s sponsor A&J Cuttery. ... Jamie Tollison won the Crate Late Model feature.