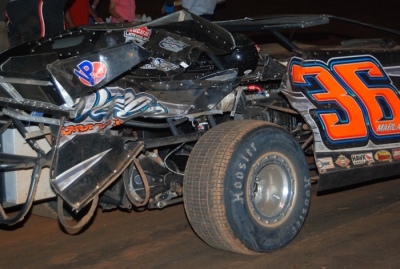 The 32-year-old driver from Winfield, Tenn., survived a tangle with a lapped car that tested his body — and even more so the body of his race car — in leading the final 84 laps of Mississippi's richest Super Late Model event to earn $25,010. | Postrace notebook | Video | Prelims | Slideshow

Fighting off a few challenges from Steve Francis of Ashland, Ky., Marlar edged away to take the checkered flags and set off celebration of hugs in victory lane for his second Magnolia victory at the third-mile oval.

"All those flashes were on me in victory lane, and I was like, 'It's been a while since I've done this,' " Marlar joked later. "I just like to get my picture taken on Saturday night."

But seeing those photos tell only half the story — you should've been the other side of the car. The entire right-rear quarter of the car was caved in two feet, completely exposing the tire and rendering the roofpost, the spoiler brace and part of the roof useless aerodynamically, forcing Marlar to fight his ill-handling Wells Motorsports Rocket Chassis the final 70 laps.

Marlar had nowhere to go when the slower car of Tommy Kerr — who returned to the track just in front of the leaders following a lap-23 caution — slammed the wall in turns three and four. Marlar slid into the mess hard and it initially appeared the damage might be terminal.

"It was all body, but it cut my tire a little bit. I didn't know this, but I'm pretty lucky I finished," Marlar said after examining the corner. "It actually had a bit ol' cut in the side of it. And it had a vibration where the mug plug had bent. So it was vibrating and doing some things I didn't want to so. The main thing was like 'Man, just don't know blow it, don't slide up out of the groove here, and don't press her too hard and blow a tire, and don't catch the lapped cars.' "

He wasn't even thinking about the back he injured in a wall-banging wreck two weeks earlier at Eldora Speedway, a tightening of the muscles that sent him to the chiropactor's office five times and kept him out of the driver's seat last weekend.

"After that deal there on lap 30, I'll probably going back to the chiropractor Monday," Marlar joked afterwards. "It jarred me around pretty good. You get out there racing, and you don't even think about that ... little things like a little soreness, you're not going to worry about that when it's $25,000."

Marlar took the checkers ahead of polesitter Shane Clanton of Fayetteville, Ga., who was gunning for his third Magnolia State 100 victory in four years. Seven-time winner Billy Moyer of Batesville, Ark., was third but never a serious factor in a race where seemingly every frontrunner ran into problems. Chris Madden of Gray Court, S.C., who started 21st, finished an attrition-contributed fourth and '99 race winner Terry English of Benton, Ky., rounded out the top five in a race where 10 cars were running at the finish.

Francis, who took second from Clanton on a lap-60 restart and nearly pulled alongside Marlar on lap 66, was still hot in the leader's tracks on lap 95 when his sputtering engine went dead with a broken camshaft. Departing before him with mechinical woes of one kind or another were Clint Smith of Senoia, Ga., (lost power running fourth on lap 39), Wendell Wallace of Batesville, Ark. (broke an engine running fifth on lap 59) and Randy Weaver of Crossville, Tenn. (radiator lost water running fifth on lap 83).

Clanton's engine was running fine as he chased Marlar the final four laps, but he had his hands full with his own damaged car after he and and fellow front-row starter David Breazeale of Four Corners, Miss., traded contact-triggering slide jobs on laps 15 and 16 as the leaders battled amid a flurry of lapped cars.

Clanton's No. 25 — sporting a nifty decal scheme mimicking a University of Georgia football jersey — suffered hampering left-front damage when Breazeale slid up into him in turn four, and on the next lap Breazeale's No. 54 suffered even worse damage to the right side when contact from Clanton knocked him into the wall and briefly up on two wheels, forcing him to retire.

"He knocked the left-front off of me, and it knocked the spindle out of it. It pretty much ended our deal there," Clanton said of the first contact. And of the second contact? "I hated that I got into him over there off turn four, but I thought I had him cleared because he hit the fence down the back straightaway ... I thought I had enough run on him to clear him, but I don't guess I did."

Breazeale didn't label Clanton's move retaliation, but he wasn't happy about losing what he thought was his best chance for a big-purse victory at one of his home tracks.

"I caught him in traffic, and I felt like I passed him clean. It was way too early to be beating and banging," said Breazeale, whose car was left with a bent upper-control arm and broken brakeline. "Shane's a good driver, there's no doubt about that, but I just felt like he didn't pay the same respect trying to pass me back."

The Clanton-Breazeale tangle moved the third-starting Marlar into the lead, and he was comfortably ahead for seven laps before a caution. But coming back to green on the restart, officials allowed Kerr's No. 4T to leave the turn-four track entrance just in front of the field, so Marlar suddenly faced lapped traffic instead of clear racetrack.

Kerr slammed turned three wall on lap 30 and his car bounded into the air, returning to the track just before Marlar's evasive tactics failed. Clanton also got a piece of it, suffering spoiler damage.

Marlar looked over his right shoulder and "I could see my roof was broken, and I was like, 'this is bad.' The roof's half tore off here. I know there ain't much spoiler," he said. "It was so loose in and across the center (of the corner) after that. I had no side-force, no downforce on the right rear quarterpanel. ... I was just so loose and skatey, I was like, 'I'm going to bounce off this cushion until sparks are going to fly.' "

Fortunately for Marlar, Clanton didn't have a capable car to provide a challenge through the middle stages, but when Francis grabbed second on the 60th lap, he began poking a nose under Marlar exiting turn two.

At the same time, the high-side groove most cars had followed earlier in the race moved to the middle of the track as the surface picked up a rubber strip.

"I started seeing some noses and I moved down a little bit. From there, it was just chase it," Marlar said. "But it was nerve-wracking my stuff was so ill-handling."

But Marlar's car handled well enough to keep the rest of the dwindling field at bay as he got his richest victory by $10. His 2004 victory in the Hillbilly 100 at Tyler County Speedway in Middlebourne, W.Va., paid $25,000 event.

"It's awesome. I've got my wins, and I'm not a professional racer. I feel like I could beat any professional racer on any given day if the stars line up for me. But I don't call myself a professional racer," said Marlar who began driving for Hazard, Ky., based Wells Motorsports in late July. "The biggest thing is David Wells put me in a real good situation there, just giving me a truck and a trailer and car and a little money in the back and said go do some racing and have some fun.

"This right here means more to me for him than it does for myself. He's got him a big win now. He's paid his dues and he's got it."

Notes: Marlar's Rocket Chassis has a Custom Racing Engine and sponsorship from Wells Motorsports, Wayne Bowen Racing Supply, Valley View Enterprises and VP Racing Fuels. ... The event was sponsored by Premier Ford. ... Nine cautions in all slowed the action. Besides the leader-involved wrecks and disabled frontrunners, yellows appeared for Brooks Strength (stopped on lap 23), Billy Moyer Jr. (slowed on lap 29), Tony Knowles (broke a lift bar on lap 35; Josh Putnam exited during the caution), and Jason Cliburn (stopped on lap 45). ... Before the main event, fast qualifier Shane Clanton received $200 from Southern Belle along with a $100 product certificate from Roush Yates Engines. ... Jack Sullivan rallied from the sixth row of a consolation race to transfer to the main event, but he was an early retiree. ... Scott Dedwylder held a transfer spot in the third and final consolation race when he had mechanical problems and pulled to the pits. ... Dane Dacus won the last-chance race while the battle for the second and final transfer spot was a wild one. Anthony Rushing had second exiting turn four but contact with Jeremy Broadus sent both cars spinning, and tail-starting Kyle Beard swept around to get the spot. Beard was eighth in the main event.