Career-best victory for Hollingsworth at Whynot 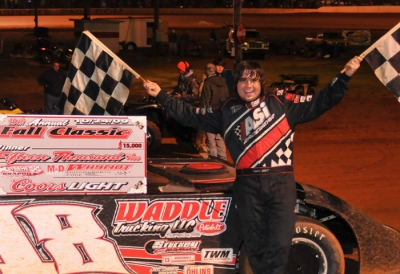 MERIDIAN, Miss. (Oct. 24) — Grabbing the richest victory of his career, Ronny Lee Hollingsworth of Northport, Ala., earned $15,000 at Whynot Motorsports Park in the 15th annual Coors Light Fall Classic. Hollingsworth started outside the front row and led most of the race, regaining the lead from Neil Baggett in the first half of the race then fighting off a challenge from Hall of Famer Billy Moyer near the lap-50 mark before pulling away in the late stages. | Video | Slideshow | Friday's prelims

The animated Hollingsworth enjoyed a victory lane celebration with crew members and supporters, along with a hug from former race winner Chris Wall.

"This is awesome! To win with all of these guys here tonight is awesome," he said after pounding the roof of his car on a chilly Mississippi night. "Man, I can't describe it, to be able to win the heat race and start in the front, then to be able to finally to put together a run good enough is unbelievable."

"I want to thank everybody that has put a hand into my program over the years. It has all paid off."

Hollingsworth crossed the finish line two seconds ahead of Dane Dacus of Arlington, Tenn., who started third and moved up late in the 75-lap feature. Moyer, of Batesville, Ark., settled for third while David Gentry of Lewisburg, Tenn., rallied from his 24th starting spot to finish fourth. Polesitter Ray Cook of Brasstown, N.C., fell back as far as seventh but finished fifth at the quarter-mile oval near the Mississippi-Alabama border.

The fifth-starting Baggett, of Shannon, Miss., took the lead on the 10th lap and led 21 laps of the feature, but mechanical woes dropped him out with a 16th-place finish.

At the drop of the green, Hollingsworth got the jump on Cook while Baggett quickly worked his way to the front. Baggett took command on the 10th lap and led five laps before an incident that knocked track owner Rodney Wing out of the race. The lap-15 caution bred another one in turn two when Chris Ragan, David Gentry and Chris McElhenney tangled on the restart.

Baggett showed his muscle when the race went back to green, lapping slower cars while Scott Slay of Clinton, Miss., took the second spot from Hollingsworth. Hollingsworth regained the runner-up slot on lap 26 while the 10th-starting Moyer began his charge, reaching the second spot behind Hollingsworth by lap 33 as Baggett faded before his departure.

Moyer turned up the heat on Hollingsworth by lap 47 as the frontrunners duked it out. Moyer edged Hollingsworth at the line to lead lap 49, but Hollingsworth was back out front when Wendell Wallace's flat tire brought out a caution. Another quick yellow appeared when Wall got into the backstretch wall near turn three.

Hollingsworth kept Moyer in check on the restart and began pulling away from the Hall of Fame driver who has frequented Mississippi's biggest races throughout his career.

While Hollingsworth asserted himself in the race's late stages, Cook moved up to battle Moyer for second, but soon they were joined by Gentry and Dacus. Dacus was up to third at a lap-71 caution for debris, and he used the restart to slip by Moyer and grab the second spot as Hollingsworth motored away from the field.

Notes: Hollingsworth's car is sponsored by Waddle Trucking, Kelley Electrical Contractors, Stuckey Enterprises, Tuscaloosa Chevrolet, Xtreme Graphics and TWM Racing Products. ... Hollingsworth finished eighth in last year's Fall Classic. ... The checkered flag waved on the 58-minute race at 11:36 p.m. ... Thirteen of the 24 starters were running at the checkers. ... The race was slowed by eight total cautions. ... A cold snap brought temperatures down to the upper 30s. ... Mike Boland of Cuba, Ala., won the Crate Late Model feature to pocket $2,000, finishing ahead of Jim McDuffie, Scott Knowles, Justin McCree and Wiley Williams. ... Among drivers failing to make the Super Late Model feature: Ray Moore, Kevin Sitton, Justin McRee, Mike Marlar, Jeremy Broadus, Scott Creel, Roger Shirley, Brad Banes, Brian Rickman, Steve Bryan along with former race winners McDuffie and David Ashley. ... Kenny Merchant of West Monroe, La., drove a Chris Wall backup car with a steel spec engine instead of his familiar No. c28; he won a consolation race and finished 13th in the main event. ... David Breazeale piloted the No. K3 machine instead of the Voodoo Motorsports No. 54. He was involved in the fifth caution on lap 30 and fell out with a 20th-place finish. ... Bub McCool started 15th and ran as high as sixth before bringing out a yellow with a turn-four spin; he ended up 21st.