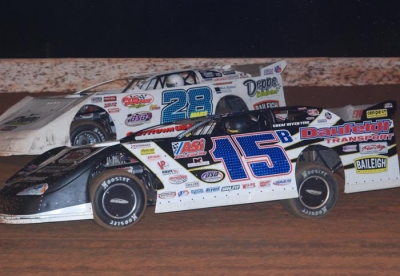 MERIDIAN, Miss. (Oct. 25) — So much for Dirt Late Model racing being a game of inches, at least when Brian Birkhofer is around. The red-hot Iowa driver left another field in his dust Saturday with a dominating performance in the 14th annual Fall Classic at Whynot Motorsports Park. | Slideshow | Fall Classic preliminaries | Fall Classic postrace notebook

Birkhofer, who faced a battle for the lead from fellow Mars Car driver Jimmy Mars following a restart midway through the 75-lap feature, ran away and hid the rest of the way in lapping all but four competitors for a victory worth $15,000. It made his rare trip to the quarter-mile oval in eastern Mississippi a successful one as he stayed undefeated in October with his third straight victory worth a total of $72,000.

"I've never had such good hospitality. All you all from Mississippi ... just a great bunch of people," the polesitting Birkhofer said while praising the track in victory lane. "I guess I reached 36 years old and I'm starting to get a little rhythm. I just feel good."

Birkhofer dominated the Liberty 100 at West Liberty (Iowa) Raceway the first weekend of the month, won the $50,000-to-win Dirt Track World Championship by more than a half-track margin at Ohio's K-C Raceway last weekend, and Whynot's Fall Classic performance was more of the same in driving a chassis he designed along with Wisconsin racing brothers Chris and Jimmy Mars. Only runner-up Billy Moyer was within a three-quarters-track margin of Birkhofer when the checkered flag flew at Whynot as Birkhofer was on the heels of former Fall Classic winner Mike Boland of nearby Cuba, Ala., who finished fifth.

"My dial's lined up right now. My car just feels awesome," Birkhofer said. "We'll go next weekend to (East Alabama Motor Speedway in) Phenix City and finish out the year, regroup at home and get another one of these good cars built. We're really pumped about what we've got built and I guess the sky's the limit, really."

"I just wishing Jimmy would've run second there to keep M-B Customs 1-2, but I'm sure he's going to work on his car a little bit. Outrunning (Moyer), that guy's pretty intense and one of the best in the business," Birkhofer said. "I think, Jimmy and I have been going back and forth a little bit in setups. I chose one tire deal, and he chose the other. Maybe he'll learn from me. That's one good thing about it, he knows what outran him there. Me and him are good buddies and we had a lot of fun racing there. We can race as hard as we want because we trust each other. Even the lapped cars tonight, they picked a line and went there, and I just kind of went around them. Everybody did a good job."

Moyer, the Hall of Fame driver from Batesville, Ark., started seventh and took the second spot from Mars on lap 48, finished in the runner-up spot about a straightaway behind with Mars of Menomonie, Wis., Scott Slay of Clinton, Miss., and Boland all on the same straightaway far, far, behind the winner. Moyer was within a half-straightaway of Birkhofer at lap 48, but Birkhofer began pulling away and always kept a cushion of at least two lapped cars between his No. 15B and Moyer's No. 21 the rest of the way.

Moyer, his car outfitted with a spec-engine package that helped him win $15,000 the previous weekend at Magnolia Motor Speedway's Cotton Pickin' 100 near Columbus, Miss., didn't find the slicker, slower track surface he needed to get an advantage on Birkhofer's open-competition powerplant.

"He had a little bit better car than we had. We were lucky to get what we got, really," Moyer said. "We'll take that for our combination. The track, it was awful fast for that little motor. We were running a 355 flat-top piston motor against a 430. Like last weekend when it gets like glass, those little (motors) are the way to go, but it just never did get that way here all weekend. You've gotta make up a lot in the seat when the motor's down. The motor ran flawlessly for what it is. ... but I think the track just never came to it like we thought it would."

Mars started outside the front row and used the high groove to lead the first 14 laps, but Birkhofer slipped underneath and was cruising by a full straightaway (and a cushion of five lapped cars) when a lap-32 caution for sixth-running Neil Baggett of Shannon, Miss., bunched the field. On the restart, Birkhofer took a few laps to get rolling again and Mars actually slipped around him to lead a few laps at the race's halfway point.

"He was protecting the bottom and making sure he had the bottom protected, and I just said I'll give her another whirl around the top and see if I can hold 'em him. It didn't work," Mars said with a chuckle. "But I was happy. I ended up third. Moyer got me there and I knew I was sitting duck probably 10 laps into it. To get third knowing that you were a sitting duck, I guess I'm happy with that."

Birkhofer stuck with the low groove most of the rest of the way, but he maneuvered through lapped traffic more easily than Moyer, who simply couldn't keep up over the race's final 25 laps.

"We started out and we started out running (higher on the track). I kind of started hunting the bottom, and that was one thing about Jimmy getting the lead," Birkhofer said. "He ran one way and I had to move around. Then the bottom came around. Like I said, it was a phenomenal racetrack. You could really get up on the wheel and finesse a little bit."

The race was slowed by just two cautions, the first on the seventh lap for a backstretch rollover of the No. W3 driven by James Ward. Ward, of Lettsworth, La., started fourth but was slowing with a flat right-rear tire to trigger the backstretch accident that also included Jason Smith of Laurel, Miss. Track workers flipped Ward's car back over and he emerged uninjured, but his tattered car was towed to the infield.

A lap-32 yellow flag appeared when Baggett stopped in turn four after his No. 21 climbed the left-rear wheel of Slay's car. Slay was able to continue with sheetmetal damage while Baggett was towed off the track.

Notes: Birkhofer's car, a chassis he designed along with Chris and Jimmy Mars, has a Pro Power engine and sponsorship from Daufeldt Transport, J&J Steel, Simon Trucking, ASI Racewear and Baileigh Industrial. ... Birkhofer has seven victories overall in 2008. ... There have been several names floated for the chassis driven by Birkhofer and Mars (Chris Mars has said he prefers "Mars Car") but in victory lane, Birkhofer added another in the mix: M-B Customs. ... Last year's winner David Ashley of Zachary, La., finished 13th. ... Chris Wall of Holden, La., who finished second last year, was 12th. ... Pat Doar drove a Jimmy Mars backup car to a ninth-place finish. ... Bub McCool of Vicksburg, Miss., was running eighth on lap 74 when he broke a driveshaft and spun into the infield on the frontstretch. ... Eddie Rickman drove his son Rick Rickman's No. 86 to an eighth-place finish. ... Among drivers failing to make the feature: Freddy Smith (flat tire on aborted start of consolation race), Chad Thrash (lost harmonic balancer while running third in consolation), Steve Rushin (dropped out of consolation race) and Chris Ragan (engine problems while leading consolation race on 12th of 15 laps). ... The event marks the last big-purse Super Late Model race of the season in Mississippi. Pike County Speedway in Magnolia, Miss., has the $3,000-to-win Jambalaya 50 on Nov. 7-8 (a race that paid $30,000 to the winner last year) and Columbus (Miss.) Speedway has $2,000- and $3,000-to-win events on Nov. 28-29.