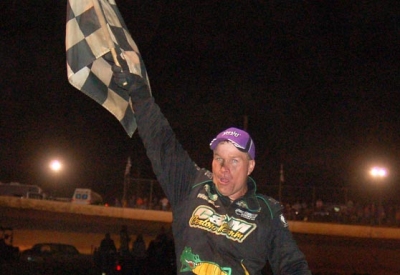 COLUMBUS, Miss. (Sept. 27) — Chris Wall was in the right place at the right time. With the laps trickling away in the 19th annual Magnolia State 100, the Holden, La., driver was riding a distant second to leader Shane Clanton. But with six laps remaining, Clanton, who had led since lap eight, pulled to a stop in turn four. | Magnolia State 100 prelims | Postrace notebook | Slideshow

The Locust Grove, Ga., driver dominated the event for 86 laps, but watched his lead and his chance to win disappear because of a flat right rear tire. And Wall was there to capitalize. Wall inherited the lead and held off Tyrone, Ga.’s Tony Knowles for the second Magnolia State 100 victory of his career.

“I feel for Shane. He was the class of the field tonight, but after he blew the tire, I knew it was mine to lose,” Wall said. “What it boils down to is that we’re in victory lane. I’ve lost races that way, too.”

On a track that was quickly becoming one-grooved, Wall had trailed second-placed Dacus since a lap-32 restart. A caution for a slowing James Ward on lap 82 however gave Wall the chance he needed to recapture second. Using a double-file restart to his advantage, Wall immediately reclaimed the runner up spot from Dacus.

Little did he know that the pass that would eventually net him $20,008 and his second Magnolia State 100 trophy to go along with his 2005 victory.

“I was pretty calm throughout the race. I didn’t really realize the importance of (passing Dacus),” said Wall. “But when Shane actually blew a tire … it was kinda surreal. I thought, ‘Oh my God, we’re in a position to win this thing.’

“I thought that it was my race to lose, that only a part failure or a blown tire would keep me from it.”

As it turned out, part of Clanton’s tire issues could very well have been because of a part failure, and a small one at that. During the caution on lap 32 Clanton, asked race officials if he could check his throttle spring.

Clanton said the return spring quit working about 20 laps into the race. Race officials wouldn’t let Clanton check the problem, so he cautiously motored on, often having to pull his throttle back with his foot. He believes it could have cost him his second consecutive victory in Mississippi’s showcase dirt Late Model event.

“I wasn’t able to be as smooth with the throttle as I needed to be,” said Clanton, who won the prestigious World 100 three weeks earlier. “I was sliding the car too much; that’s what wore the tire out. We had another part failure. What do you do?

“We had another good car. If we keep having good cars, we’ll win races.”

Clanton, who got the tire changed and salvaged an eighth-place finish, wasn’t the only frontrunner with tire issues. During the same caution, Cuba, Ala.’s, Mike Boland had to duck into the pits to change a flat tire as well. Boland was in third when he headed pit side. He made it back out as well and was credited with an 11th-place finish, the last car on the lead lap.

Twelve cars were running at the finish, with 21st-starting Kyle Beard being the last car on the track, shown one lap down.

Clanton and Wall were the only leaders, with Wall leading laps 1-7 after starting on the outside of the front row. Clanton charged to the front after starting fourth. He moved by Knowles at the start, then took four laps to clear Dacus.

Clanton took the point from Wall on lap eight as they approached the lapped car of Dewaine Hottinger. He led the next 86 laps before handing the lead — and the win — to Wall.