Richards (and car owner) step up at Octoberfest 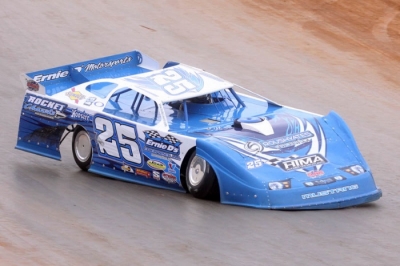 Josh Richards led all but 15 laps at Hagerstown. (pbase.com/cyberslash)

The 23-year-old Richards took command on the 15th lap Sunday in the Super Late Model portion of the 24th annual Verizon Wireless Octoberfest 350 and cruised to a $10,000 victory at the half-mile oval in an event postponed two weeks by inclement weather. | Video | Slideshow

The ninth-starting Richards took the checkers comfortably ahead of Ronnie DeHaven Jr. of Winchester, Va., for his 14th overall victory of the season.

Richards thanked car owner Ernie Davis in victory lane, not long after all the event's drivers gave Davis a round of applause at the drivers' meeting. The track announced before the features plans to reduce the laps and purse for the Late Model, big-block modified, small-block modified and sprint events, but Davis said he'd cover the purses.

“I have to thank Ernie, Connie and Keya Davis for letting me drive this car and Ernie for putting up the rest of the purse money for all the classes,” Richards said. “That just shows how much he loves to race and supports the fans and the track. Just to drive this care is awesome. We were a little soft on the left rear tire. We just tried to stay smooth. This was a cool way to end the season.”

With two-time event winner Jeremy Miller of Gettysburg, Pa., on the pole, DeHaven grabbed the top spot from the outside the front row with Dave Zona, Kyle Lear and Rick Eckert in tow. The caution waved on the second lap as four cars were involved on a backstretch incident, and Jason Miller was unable to continue.

DeHaven stretched his lead over Miller following the restart and was to the rear of the field and more than four seconds ahead by the 12th lap while Richards and Eckert gave chase.

Back-to-back restarts gave Richards the opportunity to grab second, and when DeHaven bobbled slightly in the fourth turn, Richards quickly sped past to lead the 15th lap. Eckert followed into the runner-up spot but DeHaven battled back to regain the position four laps later.

Richards led while DeHaven trailed by just over two seconds for lap after lap while Jamie Lathroum moved into third on the 21st lap and Dylan Yoder took fourth from Eckert the next lap.

Richards was into the rear of the field again on the 34th lap and began to stretch his lead by sticking lapped cars between himself and DeHaven and enjoyed 5.81 seconds just before the yellow waved for ninth-running Marvin Winters, who coasted to a stop.

Richards sped the final three laps to capture the victory over DeHaven, Lathroum, 20th-starting Booper Bare and Yoder. Dan Stone — stripped of a heat race victory at the scales the previous day — came from 23rd for sixth while last year's winner Gary Stuhler came from 17th to seventh.