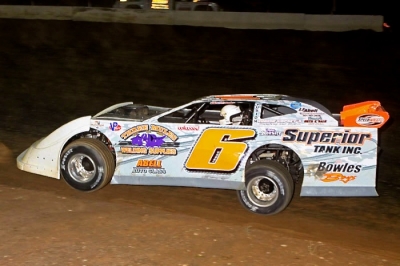 Covert settled for a second-place finish while Devin Friese of Chambersburg, Pa., was third on the same day he clinched his first UFO championship. Thirteenth-starting Gregg Satterlee of Rochester Mills, Pa., and Chub Frank of Bear Lake, Pa., rounded out the top five on a chilly Pennsylvania night.

Covert started outside the front row and took control early while Friese challenged after an early restart. Frank, Jeff Rine and Lathroum were in pursuit of the frontrunners through the first half of the race. The last caution waved when Keith Barbara stopped with a lap-33 flat tire, and Lathroum headed for the front, taking third from Frank and then the second spot from Friese on lap 37.

Lathroum used the low groove to cut into Covert's half-straightaway lead, making his first serious challenge on lap 53. Covert nearly got sideways in making contact with a lapped car, and Lathroum went by, holding on the rest of the way for the victory.

Notes: Lathroum's MasterSbilt Race Car is sponsored by Three Mules Welding Supplies and Superior Tank Inc. ... The winning purse of the main event was bumped up 10 percent by BBI Inc. of Altoona, Pa., a racing parts dealer. ... The feature paid at least $500 to every starter. ... Friese clinched his championship by entering the event. Before the race, he and his brother Trever, the team's crew chief, presented a plaque to their parents, honoring them for backing the title-winning team. ... Friese's championship pays $5,100, plus a $1,000 credit towards a new Rocket Chassis. ... The 2011 UFo circuit saw 16 different feature winners. ... Polesitter Bob Dunn faded to 18th in the main event. ... Boom Briggs of Bear Lake, Pa., was the first retiree with rear suspension problems. ... Dutch Davies of Warren, Pa., was the hard charger with his 20th-to-ninth run. ... Among drivers failing to make the feature lineup: Travis Cottle, Trever Feathers, Yim Yoder, Tom Decker Jr., Tim Senic, Rod Phillips, Derek Byler, Ron Delano Jr., Chad Hollenbeck, Shawn Claar and Nick Dickson. ... The event was originally scheduled to be a two-day affair, but cold weather condensed the show to Saturday only.