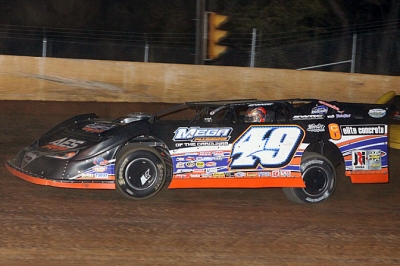 The pole-starting Davenport took the lead over fellow front row-starter and hometown driver Ronnie DeHaven Jr. on the start of the 50-lapper and led the entire distance for the victory. DeHaven closed in on Davenport a number of times in slower traffic during the caution-free event, but had to settled for the runner-up finish. | Slideshow

Two 24-lap semi-features were run to determine the starting lineup for the main event with $1,000 going to the winner of each of the races. While battling with Jamie Lathroum, the Mechanicsville, Md., driver who Friday night’s $5,000 feature at Winchester, the two cars made contact sending Lathroum for a spin. Davenport survived the contact and went on to win the prelim, but the run-in caused Lathroum to miss the main event lineup. DeHaven led the other semi-feature flag-to-flag for the victory.