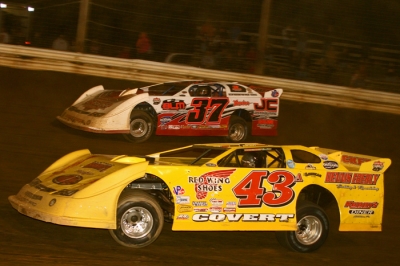 Jared Hawkins (37) takes the lead from Jason Covert (43a) in the final laps. (Tommy Michaels)

The 18th-starting Hawkins surged past Jason Covert of York Haven, Pa., and into the lead on a lap-53 restart, winning a two-lap shootout to the checkers for a $5,000 payday.

Covert, looking for a weekend sweep after his $2,000 UFO victory the previous night at Roaring Knob, faded to fourth at the finish. Corey Conley of Wellsburg, W.Va., rallied from his 21st starting spot to finish second while Jeremy Miller of Gettysburg, Pa. was third. Covert and John Garvin Jr. of Sarver, Pa., rounded out the top five.

Series points leader Devin Friese of Chambersburg, Pa., led the first 25 laps of the 55-lap main event, but a broken axle knocked him out of the race before the midpoint.

Scott Rhodes and Friese started on the front row with Friese taking command early with Rhodes, Mason Zeigler and Butch McGill giving chase. McGill was up to second after an early restart and battled side-by-side for the lead with Friese through an 11-lap stretch.

After disaster struck for Friese, McGill took command with Covert, Keith Jackson, Gregg Satterlee and Tim Senic in pursuit. Hawkins was working his way to the front, breaking into the top five past the halfway point.

McGill gave up the lead after 36 laps with engine woes, handing the point to Covert, who built a quarter-lap advantage on the field while Satterlee, Hawkins, Jackson, Senic and Conley battled far behind him in the top five.

Covert was just two laps from victory when Danny Mitchell spun, collecting Senic and Jackson. That set up a two-lap shootout to the checkers. Covert took the inside on the double-file restart, and Hawkins roared into the lead from his outside lane for the lead and the victory.

Notes: The winning Rocket Chassis is sponsored by Bobby Lake Motorsports and sponsored by JC Distributing and D&M Truck Repair. ... Runner-up Corey Conley was part of an early caution and restarted on the tail. ... UFO points Devin Friese struggled (finishing 18th), but so did his closest pursuer Jared Miley. Friese holds a 39-point lead. ... Miley, who was originally listed 22nd in the finishing order, was disqualified for actions of a team members in front of sponsors during the race. ... Among drivers failing to make the feature: Chuck Clise, Russ King, Davey Johnson, David Williams, Chuck Harper, Matt Dobnak, Steve Wilmoth, Matt Lux, Zack Dohm, Alex Ferree and reigning UFO champion Chad McClellan. ... The UFO series wraps up Oct. 21-22 at Hesston (Pa.) Speedway with $10,000 in winner's purse money over three features.