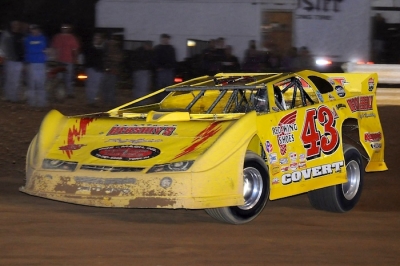 Ninth-starting Russ King of Bristolville, Ohio, was third followed by 16th-starting Gregg Satterlee of Rochester Mills, Pa., and Jared Hawkins of Fairmont, W.Va. The pole-starting Friese spun in turn three on the 11th lap while running third and dropped out with a 21st-place finish.

Friese and Chuck Clise of Frostburg, Md., started on the front row for the 35-lapper with Clise using the high groove to take command early. Miley was quickly up to second and ran side-by-side with Clise when the first caution appeared for a slowing Chuck Harper.

Miley went back to work on Clise on the restart, but another yellow slowed the action for Friese's lap-11 spin as he collected Danny Mitchell, forcing both drivers to retire.

Another yellow appeared on lap 14 for a slowing Jeremy Miller, and Miley finally took the lead from Clise on the 15th lap while Covert moved into the second spot by the halfway point on the 3/8-mile oval.

A lap-20 caution set up a double-file restart with Miley on the inside and Covert on the outset, and Covert won the drag race down the frontstretch to take control. Miley continued to chase Covert with Satterlee running third, and a pair of lap-30 yellows set up a five-lap dash to the finish.

Covert kept Miley at bay while King took third from Satterlee in the closing laps.

Notes: Covert's Barry Klinedinst-owned Rocket Chassis is powered by a Hershey's Racing Engine and sponsored by Red Wing Shoes and Pre-Mach Inc. Fabricators & Machinists. ... All three of Covert's UFO victories have come from outside the fifth row. ... Chuck Clise, who led the first 14 laps, faded to ninth at the finish. ... Among drivers failing to make the feature lineup: Alex Ferree, Corey Conley, Matt Lux and Rodney Phillips. ... Saturday's 55-lap feature at Roaring Knob pays $5,000 to the winner.