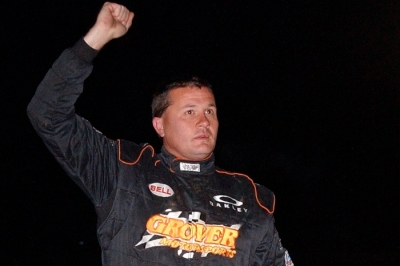 The fourth edition of the unsanctioned event was split into two 50-lap segments, with the second one featuring a complete inversion of the cars still running at the conclusion of the opening event.

Taking the point when race leader Chub Frank of Bear Lake, Pa., was involved in a tangle with Ron Davies of Warren, Pa., amid slower traffic between turns one and two, Carrier went on to claim an $8,000 victory in the first 50-lapper.

Carrier, who also won the opening feature during the 2010 Billy Bob Classic, was followed at the line by two more West Virginians in runner-up Tim Dohm of Cross Lanes and Jacob Hawkins of Fairmont. R.J. Conley of Wheelersburg, Ohio, was the highest finishing home-state driver in fourth, while Hawkins’s older brother Jared was fifth.

Jacob Hawkins led the field in the opener until third-starting Frank slipped past him after some brilliant racing that also involved Carrier, who started from the pole. The trio was racing hard when they approached a pair of slower machines on lap 39. Frank's attempt to thread the needle between the back markers entering turn one resulted in contact with Davies, who slid high and forced Frank's car high toward the outside wall.

Frank never stopped on the racetrack during the incident, but was banished to the rear of the field for his involvment. Carrier, who had slipped through on the low side to avoid the mess, led the rest of the distance and held off the 12th-starting Dohm for the checkered flag.

“I really think I was gonna get passed Chub cause my car got better as the longer I run," Carrier said. "I hate to see that happen; I’d like to raced him for the win, but rules are rules and that’s the way it goes.”

Boggs finished near the back of the first race after suffering a flat tire, but benefited from the inversion to start third in the nightcap. Boggs rebounded nicely from his woes in the first feature, taking the point on the second attempt to start the race and leading every lap for the $12,000 victory. Greg Johnson of Bedford, Ind., challenged Boggs for much of the race, but settled for the runner-up finish ahead of Frank, Carrier and Jared Hawksin.

Boggs took the point from Audie Swartz of Mindford, Ohio, on the start and opened a large lead, while Johnson settled into the runner-up slot and 10th-place starter Chub Frank quickly rolled toward the leaders.

After an opening-lap wreck, the first 22 laps were run without a caution. Between that point and the lap 42, Johnson was a thorn in Boggs' side, especially near the lap-34 mark, when he chased down the race leader and utilized the high side to threaten for the lead entering turn one. He pulled alongside Boggs, but never had enough to complete the pass.

"I could hear him, but the harder I entered the corner, the better my car would run," Boggs said. "I didn't wanna catch lapped traffic during that long stretch of racing, so I was hoping for a caution."

Boggs got it on the 42nd circuit, setting up an eight-lap dash to the wire. He pulled away on the restart, leaving Johnson to battle with Frank for the runner-up slot.

"I got to (Boggs) for a few laps just before the last restart, but there was nothing I could do to pass him," Johnson said. "He moved up and used a whole bunch of the track, and that's probably the same thing I'd have done. When he did that, it slowed my momentum getting into the corner just enough to keep me from passing him."

Notes: Carrier's Grover Motorsports-owned Rocket Chassis has a Grover Racing Engine and sponsorship from Engines Inc., Cox Wrecker Service and Blue Ridge Machinery and Tools. ... Boggs drives a Swartz Race Car sponsored by The Weld Shop and K&J Machine Shop. ... Carrier’s victory his eighth of the year in an event paying $4,000 or more to the winner. It is also his sixth special event victory in Ohio. ... The $12,000 victory is Boggs’ second triple-digit triumph in the past month. He earned $10,000 in the unsanctioned Southern 50 at Southern Ohio Speedway on Sept. 2. ... The second feature was red-flagged on the first attempted start when Daniel Kattine flipped in turn one after a bout with the outside concrete.