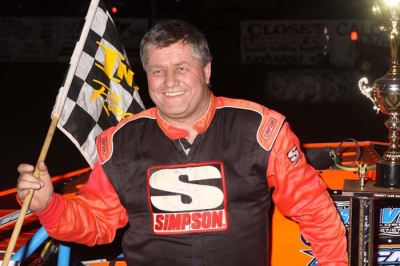 His hands full with his fellow Pennsylvanians in the event's late stages, Frank pulled away on a lap-46 restart to secure his third victory of the season.

Eckert, of York, Pa., got the runner-up spot while the sixth-starting Stone, of Thompson, Pa., settled for third after leading a single lap. Polesitter Boom Briggs of Bear Lake, Pa., Frank's former crew chief, was fourth and Jared Miley of South Park, Pa., rounded out the top five. ULMS champion Mike Knight of Ripley, N.Y., was seventh in the season finale.

Briggs and Dutch Davies started on the front row, but Frank quickly took second at the outset and took the lead from Briggs after a lap-five restart.

Driving his bright orange car, Frank began to pull away while Briggs was trying to fend off Eckert, Davies and Stone in a battle among the top five. As the leader entered lapped traffic, Eckert secured the third spot and began tracking Briggs.

With Frank still out front, Briggs and Eckert worked the low side while Stone chased them up top. Stone got up to second on the 29th lap and when Frank had trouble lapping Chad Valone, Stone and Eckert were all over the leader.

Stone edged ahead of Frank to lead the 36th lap, but Frank came roaring back to regain the point when Stone slid high in turns three and four, falling back to third behind Eckert.

Eckert stayed hot on Frank's heels with Stone just behind in the final laps, but Davies slowed on the 46th lap to bring out the second and final caution. Frank pulled away on the restart to wrap up the victory in a race he won in 2006.