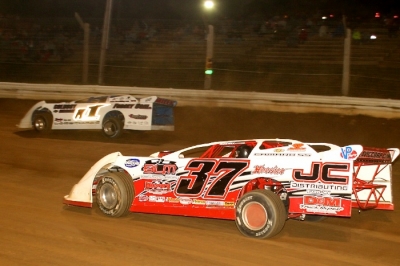 MARKLEYSBURG, Pa. (Sept. 10) — Fighting back to regain the lead on the 16th lap, Jared Miley of South Park, Pa., led the rest of the 14th annual King of the Knob on Saturday at Roaring Knob Motorsports Complex in a 51-lap race co-sanctioned by the UFO Race Championship Series and Three State Flyers. | Slideshow

Miley took the checkers ahead of seventh-starting Jared Hawkins of Fairmont, W.Va., for his second UFO victory of the season and the first of his career on the Three State Flyers circuit.

Jason Covert of York Haven, Pa., who wrapped up his third Three State Flyers championship, was third while UFO points leader Devin Friese of Chambersburg, Pa., was fourth. Jeremy Miller of Gettysburg, Pa., rounded out the top five, recovering from a lap-12 spin and rallying from the tail.

D.J. Cline took the lead at the drop of the green, but Miley went ahead on the second lap to take command. Friese took second from Cline on the ninth lap and set his sights on the lead, making his move on a lap-12 restart.

But Friese's lead was short-lived as Miley fought back out front on the 16th lap and stayed in command the rest of the distance.

A final caution appeared on the 48th lap, and Hawkins took advantage of a rare Covert mistake on the restart, taking second and taking aim at Miley, but his charge fell short as Miley wrapped up his first career victory at Roaring Knob.