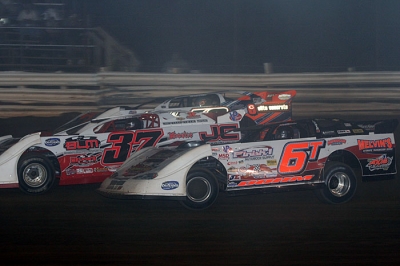 MIDDLEBOURNE, W.Va. (Sept. 2) – Defending his home turf against a host of invaders gearing up for the Tyler County Speedway’s Black Diamond 125, Jared Hawkins of Fairmont, W.Va., scored the richest victory of his career Friday night at the quarter-mile oval, picking up $8,000 in the UFO Race Championship-sanctioned Area 51 main event. Slideshow | Video

The sixth-starting Hawkins advanced to second early in the race and trailed outside-front-row starter Jonathan Davenport of Blairsville, Ga., for the first seven laps. Hawkins pulled alongside Davenport on lap eight while the low-running Tim Dohm of Cross Lanes, W.Va., made it a three-way battle the next lap.

The three drivers went three-wide for two laps before Hawkins and Dohm pulled ahead of Davenport on lap 11 and continued their own side-by-side battle for one more circuit. Hawkins finally pulled ahead of Dohm on lap 12 and began to open a comfortable lead.

World of Outlaws regular Darrell Lanigan of Union, Ky., moved by Dohm for second midway through the race and had a shot at Hawkins on a restart with eight laps remaining. But Hawkins pulled away, and cruised to the victory.

“This is by far the biggest race we’ve ever won,” Hawkins said of the fourth UFO victory of his career. “It feels good to come here and run good. This is my favorite track in the world. I grew up watching my dad here and I couldn’t ask for anything better.

“This track brings a lot of good drivers and it’s a different track to get around. Some of the newcomers might struggle a little bit, but these guys they don’t have no problem picking up on it after a couple laps.”

Tyler County Speedway hosts the second annual Black Diamond 125 event Saturday night. The World of Outlaws-sanctioned event splits the field in half following time trials for heat races that will set the starting fields for two separate 40-lap, $10,000-to-win semifeatures. The top eight finishers in each semifeature will advance to the $20,000-to-win finale.