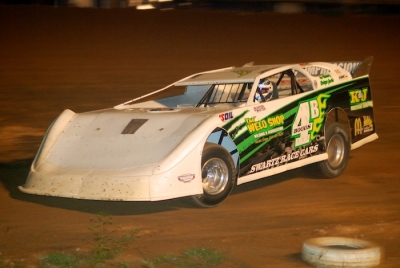 Jackie Boggs led all the way in the Southern 50. (DirtonDirt.com)

WHEELERSBURG, Ohio (Sept. 2) — Little Seth Boggs slept through most of Friday's Southern 50, missing a series of double-file restarts, a scary backstretch accident and a parade of competitors vainly trying to keep up with his daddy. The 3-month-old's mommy said he roused with about five laps left in the unsanctioned special at Southern Ohio Speedway, and what he saw those last laps were just like the other 45 — Jackie Boggs was dominating. | Notebook | Slideshow

"You woke up at the right time," said Boggs's girlfriend Andrea Kelley as she carried little Seth back to the pits following his first-ever visit to victory lane. "I got in trouble last time for not bringing him."

But a contented and well-rested Seth was right there in victory lane along with the rest of the team's supporters to celebrate the first $10,000 victory in seven years for Boggs, the 42-year-old driver from Grayson, Ky., who cut his racing teeth at the 4/10-mile oval.

Boggs notched his fourth straight victory at the track that reopened two months ago after being shuttered for eight seasons, helping breathe new life into a racing program that's had its struggles in recent years.

"It's been a helluva year for us," Boggs said. "Even to have enough money to get out and go race, because we've had some engine problems that nobody could explain."

But Boggs got help from crew members who rebuilt his powerplant to eke out some extra horsepower, and it was evident he had plenty under the hood as he cruised without a challenge on a warm Labor Day weekend evening.

Smoothly getting on and off the accelerator through the corners, Boggs built straightaway leads much of the race in wrapping up the victory as four drivers took turns trying to catch him in second spot.

"We made all the right calls and everything went good tonight," said Boggs, who lapped all but six competitors in a race where more than half the 21-car field was involved in a melee after fourth-running Eddie Carrier Jr. of Salt Rock, W.Va., got crossed up on the backstretch.

Ninth-starting Greg Johnson of Bedford, Ind., flattened a right-front tire as part of the mess — and also spun out on the 14th lap after contact from Delmas Conley — but rallied to finish second.

Wheelersburg brothers R.J. Conley, who started 11th, and Rod Conley, who started on the pole, finished third and fourth while Doug Drown of Wooster, Ohio, settled, for fifth after using the high groove to briefly grab the second spot midway through the race.

Seven cautions slowed the action, with the 12-car accident on the lap-15 restart by far the most serious. Carrier's right-rear tire slipped over the berm exiting turn two and when he wheeled his car back onto the track — trying to avoid slammed the butt end of the turn-three wall — he lost control and found his No. 28 perpendicular to the onrushing field.

Virtually everyone fifth on back got a piece of the accident that left a cluster of cars at the end of the backstretch with the cars of Casey Noonan, Brandon Queen, Jimmy Cobb, Ray Cook, Delmas Conley, Russ Frohnapfel, Mark Queen, Johnson and Shannon Thornsberry among drivers suffering the most damage.

Thornsberry was briefly knocked unconscious. The Martin, Ky., driver was checked out my medical personnel at the track and said he felt OK except for a headache.

While most of the cars were piled up together on the lower part of the track heading toward the turn-three entrance, Carrier's car came to a rest higher on the backstretch after taking a few licks, and his car's right-rear wheel ripped off altogether, bounding 50 yards further down the track into turn three.

"I got off the backstretch and it pulled me over," Carrier said. "I hated to get come back out on the track, but I didn't want to hit the end of that wall, either. So I took my chances of coming back on the track — and I guess tearing everybody else up."

Johnson and Cook were among drivers in the mess able to return to finish on the lead lap, and Johnson decided that his tangle with Delmas Conley that sent him to the tail before the restart turned out to be a blessing.

"I probably would've been right in the middle of it," the runner-up said.

Notes: Boggs drives a Swartz Race Car sponsored by The Weld Shop and K&J Machine Shop. ... His car is nicknamed Crybaby. ... Among his three previous victories was a $5,000 payday. ... His chassis builder Audie Swartz caught a ride to victory lane, riding on the driver's side window. ... Rod Conley held the second spot until Drown swept around mid-race. ... R.J. Conley got by Drown on lap 33, but Johnson took second three laps later. ... Besides the lap-15 accident, which drew a red flag, the other cautions were for one-car incidents. ... Twelve cars continued after the lap-15 wreck, including a few drivers who rejoined the race after dropping out early.