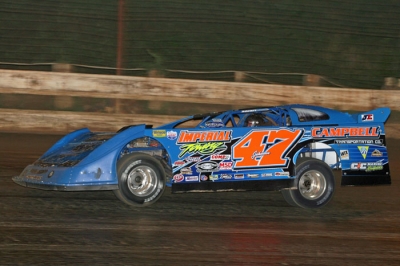 IMPERIAL, Pa. (Aug. 20) — Davey Johnson of Greensburg, Pa., stayed perfect in UFO-ULMS action at Pittsburgh's Pennsylvania Motor Speedway this season with a $4,159 victory in the fifth annual Red Miley Rumble. Johnson took the lead from Michael Norris of Sarver, Pa., on a lap-25 restart and led the rest of the 44-lap feature at the half-mile oval. | Slideshow

Norris followed Johnson to the checkers with Michael Davis of Rayland, Ohio, holding down third in the race co-sanctioned by UFO Race Championship tour and the Northern Tier United Late Model Series. Brandon Burgoon of McDonald, Pa., and Steve Baker of Morgantown, W.Va., both rebounded from flat tires and rounded out the top five. Polesitter Alex Ferree of Saxonburg, Pa., led four laps early but retired with an overheating car.

Norris was in command early but Jared Miley's spin brought out a lap-eight caution. Ferree grabbed the top spot on the restart and led four laps before Burgoon's flat tire, but Ferree drove his overheating machine to the pits before the race went back to green.

That gave the lead back to Norris with the third-starting Johnson in pursuit as the race went green until Miley spun again midway through the race. Three laps later, Baker's flat brought out another yellow, and Johnson took advantage on the restart to take command.

Two quick yellows slowed the race — for lap-27 tangle between Jim Lepro and UFO points leader Devin Friese and a lap-30 slowdown for Daryl Charlier's frontstretch spin — but Johnson stayed in control and led the rest of the way.

Notes: Johnson drives a Rocket Chassis sponsored by Imperial Towing and Campbell Transportation. ... The victory gives Johnson five for his career on both tours. He is the winningest driving on the fourth-year UFO tour. ... Johnson scored a pair of UFO/ULMS co-sanctioned events earlier in the year at PPMS. The first was June 11 and the other July 23. ... Runner-up Michael Davis leads the weekly DIRTcar points at PPMS. ... Boom Briggs was leading the third heat race when a body brace broke loose and cut into his right-front tire, slowing his pace. ... Jim Lepro fielded a new MasterSbilt Race Car. ... UFO series regular Danny Mitchell was done for the night after crashing hard in a consolation race. ... Dennis Lunger also crashed but went to a backup car for the main event. The car initially failed to fire and he missed the start, but when he joined the race after a first-lap crash, the lucky dog rule put him back on the lead lap. ... Keith Barbara ran in the top 10 but slowed and pitted late in the race. ... Kyle Lukon crashed leading a consolation race race; he made repairs but ran only a handful of laps in the main event. ... The UFO tour will be back in action with an $8,000-to-win event Sept. 2 at Tyler County Speedway in Middlebourne, W.Va. ... The ULMS tour will be off until mid-September, when it returns to PPMS for a weekend doubleheader Sept. 16-17.