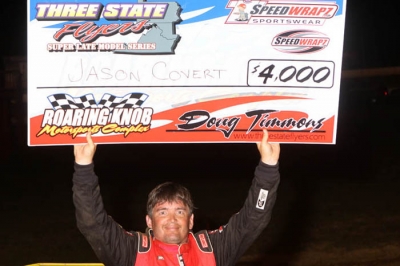 Covert, the third-year tour’s only champion, wasted little time getting to the front and moved into the top five by lap 12 of the 35-lap race. He then chased down the lead pack and came out on top of a five-car battle for the lead on lap 22. He pulled away to comfortable advantage after moving out front, but had to hold off Jamie Lathroum of Mechanicsville, Md., following a restart with three laps remaining.

Lathrom came up short in his late charge and settled for the runner-up finish. Butch McGill of West Union, W.Va., who scored a $5,000 victory in an unsanctioned event Friday night at Elkins Raceway in Kerens, W.Va., finished third with Mel Minnick Jr. of Uniontown, Pa., and Keith Jackson of Odenton, Md., rounding out the top five finishers.

Notes: Covert's Rocket Chassis is powered by a Hershey's Racing Engine and sponsored by Red Wing Shoes and Pre-Mach Inc. Fabricators & Machinists. ... The victory gives Covert a series-leading 14 wins for his career. ... Gregg Satterlee of Rochester Mills, Pa., and Mason Zeigler of Farmington, Pa., both battled for the lead early in the race, but fell out contention. Satterlee ended up 13th with Zeigler 17th. ... The tour next competes on Labor Day weekend, with $3,000-to-win events scheduled for Sept. 3 at Thunder Valley Raceway in Central City, Pa., and Sept. 4 at Hesston (Pa.) Speedway.