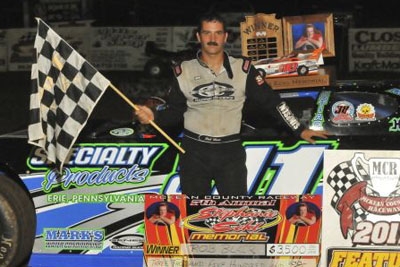 Eleventh-starting Boom Briggs of Bear Lake, Pa., finished second followed by Dutch Davies of Warren, Pa. Jason Dupont and ULMS points leader Mike Knight, who recovered from an early spin, rounded out the top five in the race that honors the memory of a young race fan who died in a Thanksgiving Day accident in 2003. Dennis Lunger ran among the leaders most of the way but had a flat left-rear tire that sent him spinning on lap 29 of the 30-lapper.

Blair has eight career ULMS victories, including a July 14 triumph in the tour's previous visit to McKean County.