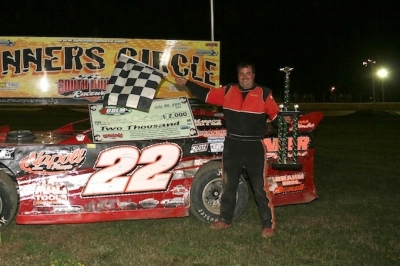 Oakes, the 2008 and '09 champion on the Canadian tour, earned $2,000 for the victory in outrunning local standout Andrew Reaume of Blenheim. Adam West of Ridgetown, Ontario, was third to match his best career Late Model performance while Chris Ross of Charing Cross, Ontario, was fourth. Mike Lewis of Wallaceburg, Ontario, was the highest finishing track regular, finishing ninth. Notebook | Slideshow

The track celebrated its 40th anniversary, opening the night with with a ceremony honoring 80-year-old Joe Atkinson, who designed and helped build the racetrack — then known as Raleigh Raceway Park — in 1971. After receiving a commemorative plaque, he was given lap around the track on a golf cart.