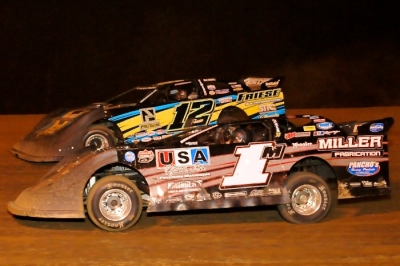 STRONGSTOWN, Pa. (July 17) — Devin Friese of Chambersburg, Pa., could get used to this winning on the UFO Race Championship Series.

Just nine days removed from his first-ever series victory, Friese started on the pole Sunday at Dog Hollow Speedway and led nearly all the way, fighting off fellow front-row starter Jason Covert of York Haven, Pa., for a $4,000 victory in the Connor Bobik Memorial. | Slideshow

Friese started into the first row but moved to the high groove early while Covert held second place against challenges from Jeremy Miller, who took the spot on the 11th lap.

Miller set his sights on the leader and edged ahead to lead lap 25, but Friese fought right back in the side-by-side battle. Miller inched ahead again to lead lap 35, but down the backstretch Miller's car lost power and drifted to the bottom of the track. He was pushed to the infield with oil puddling underneath the car.

Friese restarted with Covert on his tail for the final nine laps, and Covert took up the low-side charge for a side-by-side battle the rest of the way. Covert nosed ahead, but never at the start-finish line as Friese stayed slightly ahead. Covert's bobble in turn two on the final lap let Friese escape with the victory by a half-length at the checkers.

Notes: Friese's MasterSbilt Race Car has a Vic Hill Racing Engine and sponsorship from Friese Bus Transportation, Dilly's Bar and Restuarant and Waste Management. ... The event was in memory of the 6-year-old son of track photographer Derek Bobik, who lost a brave fight with cancer during the off-season. ... A crazy auction was held throughout the night with proceeds going to the Make-a-Wish foundation. The auction raised $2,565. ... Shawn Jett won the night's Fastrak Crate Late Model feature over Ricky Meglaye. ... Dog Hollow hosted 410 sprint cars for the first time with Rod George taking the victory. ... The three-division program drew 67 race cars overall. ... Dog Hollow hosts the World of Outlaws Late Model Series on July 26. ... Next up for UFO competitors is a twin-feature program July 23 at Pittsburgh's Pennsylvania Motor Speedway.