Friese roars to his first victory on UFO circuit 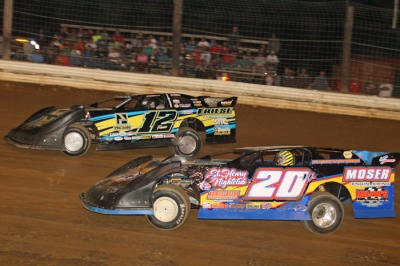 MARKLEYSBURG, Pa. (July 9) — Series points leader Devin Friese of Chambersburg, Pa., led all but the first lap Saturday at Roaring Knob Motorsports Complex for a $4,000 victory, the first of his career on the UFO Race Championship Series. | UFO notebook

Starting outside the front row, Friese stretched his series lead to 25 points with the victory in the 41-lapper, taking the checkers ahead of 20th-starting Ron Delano Jr. of Stoysown, Pa. Polesitter Jacob Hawkins of Fairmont, W.Va., who led the first lap, was third with his brother Jared Hawkins of Fairmont fourth. Mel Minnick Jr. of Uniontown, Pa., who started 13th, rounded out the top five in a race slowed by seven cautions, including three before a lap was completed.

Jacob Hawkins led the first lap in a side-by-side battle with Friese, with Friese edging ahead on the second lap with Jacob Hawkins, Tommy Beck, Chad McClellan, Jared Hawkins and Tim Senic in pursuit. By the 10th lap, Friese was battling slower traffic and was still in command for Greg Tressler's lap-14 yellow.

After Mason Zeigler and Jeff Jones tangled on the restart, Friese resumed his run on the high side four more laps before a caution for Matt Dobnak.

Friese stayed in control through the race's middle stages with Delano breaking into the top five on lap 32. Delano took fourth from McClellan a lap later, holding that spot when the final caution appeared for a stalled Keith Barbara.

With Friese out front, Delano looked under Jacob Hawkins in the closing laps, nosing ahead to take the runner-up slot with two laps remaining. It was too late to catch Friese, who solidifed his series points lead.

Next up for UFO competitors is the $4,000-to-win Connor Bobik 100 on July 17 at Dog Hollow Speedway in Strongstown, Pa.