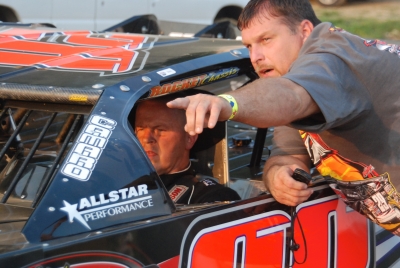 PEEBLES, Ohio (July 6) — While watching a black No. 28 race car grab a heat-race victory Wednesday at Brushcreek Motorsports Complex, a pitside observer was briefly confused when the announcer called the driver Darrell Lanigan.

"Did Lanigan change numbers?" he asked, knowing Lanigan typically pilots a No. 29.

Yes, at least for one night, Lanigan did change numbers, piloting the John and Linda Weber-owned car that his nephew Terry Lanigan pilots on occasion. | Sidebar | Slideshow | Notebook

But while Lanigan's entry carried a different number, most everything else was the same for the 41-year-old driver from Union, Ky. He was in a familiar Rocket Chassis, he had crew chief Randall Edwards at his side and he brought the talent that's made him one of the nation's top Dirt Late Model racers.

That all added up to Lanigan's $10,000 victory in Steven Partin's Hidden Gem, an unsanctioned race at the slick 3/8-mile oval in southern Ohio.

"That definitely helps," said Lanigan, whose season was slow to get rolling after a broken tailbone hampered him before he reeled of four World of Outlaws Late Model Series victories in five starts through April 30. "We've been running (poorly) lately, so this one here kind of helps out a little bit. It'll pump us back up, anyways."

Dohm started outside the front row and got the jump on polesitter Donnie Moran of Dresden, Ohio, then ran the high side most of the race while many competitors stayed with the low groove. He built nearly a full-straightaway lead on Lanigan at the halfway point, but he was vulnerable after the lap-32 caution period when Lanigan joined him for a two-car breakaway from the field.

"It slicked off, and it came right around to Lanigan's type of (surface)," Dohm said. "Actually that's pretty good for me to run that good in the slick. I'm usually not any good in the slick. You hate to lose one, but still, it's not too bad to run second to Darrell Lanigan."

Lanigan, who drove the same Rocket Chassis that he piloted much of the 2008 season en route to his World of Outlaws championship, wasn't very effective early in the race despite stealing second from Moran after a lap-five restart.

"I had to get to him first," Lanigan said of Dohm, who led comfortable most of the way.

"That bottom was a little greasy there at the beginning in (turns) one and two, and when it got run in a little bit, I could really get launched up out of there. So that last 20 laps it was pretty good."

Lanigan's car got faster and faster exiting turn two in the low groove, allowing him to pull alongside on laps 40 and 41 before he made the winning pass.

"I knew once I could get beside of him down the backchute I could drive on up into (turn) three and slide up there in front of him. I was good enough off (turn) four to beat him off four."