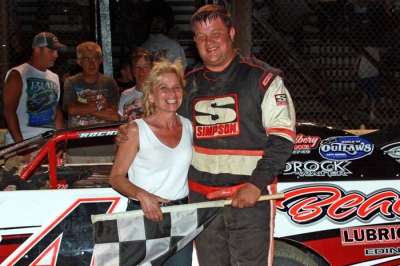 BUSTI, N.Y. (July 2) — Making a dramatic rally from the tail, Dave Hess Jr. of Waterford, Pa., made his 10th Late Model victory of the season a big one, collecting $5,500 on Saturday at Stateline Speedway in the inaugural Fritz Seamens Memorial.

Hess ended up against the first-turn wall after one of the first attempts to start the 55-lapper, forcing him into the pits before a single lap was scored.

Hess pulled away from the field, building nearly a five-second lead at one point, and completed the unsanctioned victory that honored the former track owner who died last September.

Scott Gurdak and Chris Hackett started on the front row, but it took a while to get the race rolling. First, Dennis Lunger and Ryan Scott spun together in turn one; then Hess ended up against the turn-one wall; and finally Jim Mason spun in turn one before the fourth attempt to start the race stuck.

The low-running Gurdak jumped into the lead over the high-running Hackett, who nosed ahead on the fourth lap and began edging away from Gurdak.

But by lap 15, Gurdak tracked down Hackett and regained the lead on lap 17 while third-running Doug Eck gained on the leaders. Eck took second from Hackett on lap 20, and a yellow flag fell five laps later when Dutch Davies slowed in turn three with steering issues.

Eck went side-by-side with Gurdak for the lead on the restart, taking over on lap 26 as Hess headed for the top five.

But on lap 31, Eck slowed with front suspension problems, handing the lead back to Gurdak with Hess restarting right behind him. Hess overtook Gurdak two laps later and built a big lead before a spin by Lunger slowed the race with 15 laps remaining.

Randy Lobb pulled out on lap 46 and the second-running Gurdak retired two laps later, leaving Valone a quarter-track behind in the runner-up spot.