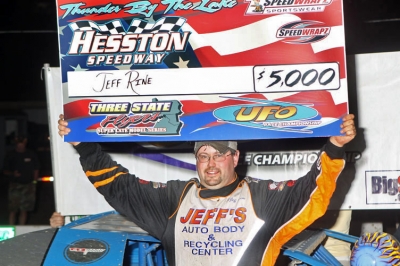 Jeff Rine of Danville, Pa., shows off his earnings. (pbase.com/cyberslash)

HESSTON, Pa. (July 3) — Jeff Rine of Danville, Pa., earned $5,000 with his victory in the co-sanctioned Thunder by the Lake, giving him his first career victories on the UFO Race Championship Series and Three State Flyers circuit.

Rine overtook outside front-row starter Boom Briggs of Bear Lake, Pa., on the 29th lap and scored the 51-lap victory that was delayed a few hours by evening rain. | Slideshow

Briggs settled for second with 11th-starting Nick Dickson of Lewistown, Pa., in third. Dylan Yoder earned hard charger honors with his 19th-to-fourth run and polesitter Devin Friese of Chambersburg, Pa., who led the first nine laps, rounded out the top five. Jason Covert of York Haven, Pa., ran among the leaders most of the way but departed with a misfiring engine on lap 43.

Friese led at the outset with Briggs in second, but a lap-three yellow for a slowing Doug Eck reset the field. Rine started third, but slipped back to fifth in the early going.

After a lap-nine caution for Bo Feathers, Freise slipped high on the restart and Briggs took command with Rine up to second and Friese third.

A battle for the lead ensued among Briggs, Rine and Covert before a pair of mid-race cautions for Danny Mitchell and J.T. Spence.

On the lap-27 restart, Briggs started on the inside but moved up to the high side, opening the door for Rine to dive inside turn two and take a lead he'd never give up on lap 28.

Rine stayed in control while Covert's car misfired for a dozen laps before he finally called it a night, one lap after Jared Miley's lap-42 yellow.

Rine chose the outside lane for every restart, but Briggs took a final shot at him following a caution in the final few laps. Briggs raced door-to-door with Rine on the restart, and the frontrunners made slight contact in turn two. But Rine never faltered in turning back the charge while Briggs bobbled and had his hands full with Dickson.