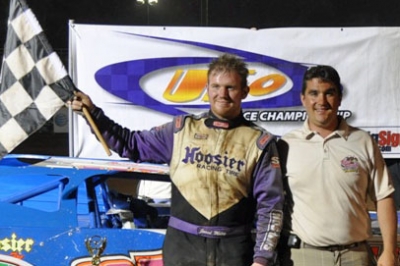 Polesitter Corey Conley of Wellsburg, W.Va., was second followed by 10th-starting Jared Hawkins of Fairmont, W.Va., Butch McGill of West Union, W.Va., and UFO points leader Devin Friese of Chambersburg, Pa., rounded out the top five. Danny Mitchell of Clarksburg, W.Va., was battling for fifth when a lap-21 incident knocked him from contention.

Steve Wilmoth of Blue, W.Va., jumped into the early lead over Conley, Robbie Scott and Miley, but the race was slowed on the third lap for Keith Barbara's flat tire, the first in a rash of tire problems throughout the race.

With a few more cautions slowing the action, Wilmoth stayed in control through the 11th lap, but Scott nosed ahead down the backstretch to lead the 12th lap. Then things turned topsy turvy when a caution flag flew.

The yellow meant Wilmoth would be restored to the lead, but he pitted with a flat during the caution period. Scott was then back in the lead, but he slowed before completing another lap, knocking him out of the race and handing the point to Miley.

Miley stayed in control through a series of cautions, and the final yellow on lap 42 for Greg Baumberger's flat tire gave Conley one last shot. Conley was within a car length on lap 45, but Miley edged away the final six laps to cruise to the checkers.

Notes: Miley's Rocket Chassis is sponsored by Colussy Chevrolet and Forcey Coal. ... Miley has one UFO victory each of the last three seasons. ... The series is averaging 35 cars per event. ... Among drivers failing to make the feature lineup: Shane McLoughlin, Zack Dohm, Tony Musolino and Rick Conley. ... UFO competitors head to Hesston (Pa.) Speedway on Sunday for a $5,000-to-win event co-sanctioned by the Three State Flyers.