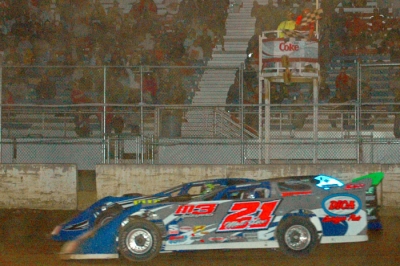 Matt Lux (21) was second at McKean, just inches behind outside-running Chad Valone. Mike Knight is between them. (Jay Pees)

The outside-running Valone's nose crossed the start-finish line just inches ahead of Lux in the inside lane, and another few inches ahead of Knight who was sandwiched between them. | Slideshow

The fourth-starting Valone earned $3,000 for his second career ULMS victory as the tour launched its three-race Firecracker Tour over the holiday weekend.

Jason Dupont and Lux, of Franklin, Pa., paced the field at the outset of the 30-lapper with Dupont leading early over Lux and Valone following a lap-one caution for Denny Fenton.

Eighth-start Greg Oakes was on the move early, swapping the third spot with Lux on laps four and five while Ron Davies running fifth.

Further back, Knight was on the move, and he broke into the top five on the 12th lap and took fourth from Oakes a lap later. After a halfway caution, Lux challenge Valone and Dupont on the restart and the trio was three-wide in turn one.

Valone came out the leader with Knight getting into second and Lux third as Dupon was shuffled back to fourth.

With just a few laps remaining, Knight repeatedly tried to get underneath Valone in each corner, but Valone was always able to edge away. After the white flag flew, Knight made another charge and had to back off to avoid contact, then rallied again in turns three and four while Lux nosed into the mix.

The frontrunners flew three-wide toward the flagstand with Valone narrowly holding off Lux and Knight in a photo finish.