Covert gets best of Sagi for $3,000 TSF victory 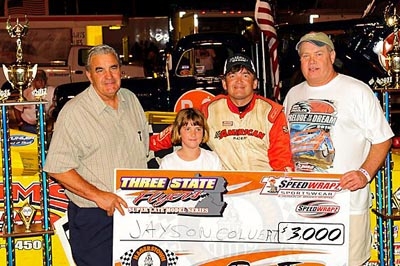 Jason Covert picks up $3,000 at the Red Nininger Memorial. (wrtspeedwerx.com)

The third-starting Covert took the lead from polesitter Alan Sagi of Hagerstown after a lap-14 restart, making contact as he motored past and went on to a two-second victory over J.T. Spence of Winchester, Va. He earned $3,000 for the fourth annual Red Nininger Memorial victory. | Slideshow

“I’ll just tell you, I wanted it more than those guys tonight,” Covert said. “(Car owner) Barry (Klinedinst) and the guys worked their guts out to get this car ready. At 9 last night, it didn’t have a body and no motor. All the credit goes to them.

“Racing Alan is always a pleasure, but I got to the outside of him and I needed to get in front of him to get the air off his nose. There was one lane below me, but we did get together.

"It was definitely my fault, but we do have roll cages, seat belts and helmets in these things. We’re not trying to crash, but are out there racing on the edge every night. A bad night here is better than a good day at work, so I like being here.”

Sagi, racing with a broken wrist after suffering the injury in incident the previous week, earned the pole by virtue of his dash victory and pulled into the early lead with Covert quickly into second.

Sagi continued to hold a second plus advantage over Covert as the fifth-starting Spence overtook D.J. Myers of Greencastle, Pa., on the fourth lap. Jim Bernheisel of Lebanon, Pa., repeatedly challenged Myers until the caution waved on lap 14 for a slowing Jamie Lathroum.

Covert went to the outside on the restart as Sagi led the next lap, but in turn three, Covert made contact with Sagi’s right front as Sagi fought to gather it back in while Spence motored by into the runner-up spot.

Covert sped away and was 2.75 seconds ahead and into rear traffic while Sagi was a near equal distance back in third. Covert continued through traffic en route to victory over Spence and Sagi, while Jeremy Miller of Gettysburg, Pa., and Bernheisel rounded out the top five.