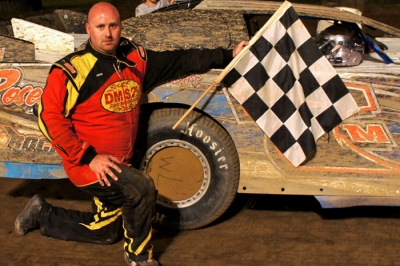 Michael Davis captured one of the twin features at PPMS. (racingweb.com)

Making his first start of the season at PPMS, Johnson raced forward from his sixth starting position to take the lead by the second lap of the night’s first feature and held off a late challenge from Jared Miley of South Park, Pa., to score the victory. Behind Miley, Devon Friese of Chambersburg, Pa., finished third with Brandon Burgoon of McDonald, Pa., and Daryl Charlier of Midway, Pa., rounding out the top five finishers.

Rayland Davis led every lap of the second race to pick up his first victory of the season and fifth of his career at PPMS. Miley scored another runner-up finish after briefly challenging Davis midway through the race. Burgoon finished third with Chad McClellan of Stoysown, Pa., fourth and Friese fifth.

Notes: The doubleheader was set up by a rained out event May 14. ... Johnson started 12th in the second feature and advanced to second before getting caught in a wreck when a pair of lapped cars tangled. ... The UFO tour will be back in action with a doubleheader weekend June 17-18 with a pair of $3,000-to-win events at Elkins Raceway in Kerens, W.Va., and Thunder Valley Raceway in Central City, Pa. ... Kyle Lukon of Burgettstown, Pa., won the night’s Crate Late Model feature.