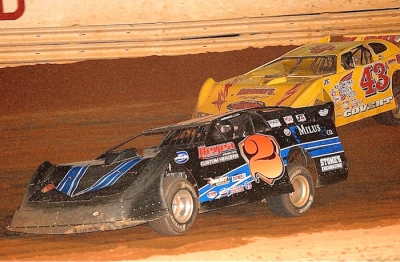 Stone held off a strong late-race challenge from Jason Covert of York Haven, Pa., while Dylan Yoder of Selinsgrove, Pa., finished third. Utilizing a backup car after suffering mechanical problems in his primary ride, Vic Coffey of Caledonia rallied from 22nd to finish fourth ahead of Ricky Elliott of Seaford, Del.

Stone earned $5,000 for the win, while Austin Hubbard's 15th-place result was plenty enough to claim the championship by 141 markers over Coffey, who was the runner-up in the title chase. Hubbard won twice during the seven-race miniseries that started last Saturday in Hagerstown, Md.

The third-starting Stone was holding down the runnerup spot when polesitter and early leader Lathroum lost the handle on his car in turn two. He was unable to recover, and his lazy loop toward the inside lane collected the approaching Stone, who ducked low to the track's hub to miss contact, but without success. Stone's right rear clipped Lathroum's front end, knocking Lathroum out of the event and forcing Stone to finish the remaining laps without much of his right-side sheet metal on the rear quarter.

"The car definitely didn't handle as good as it was running before the accident, and with the sheet metal tore up I was worried about the effects on the spoiler," Stone said. "You know how it is when your car ain't right, and you start hearing vibrations. I heard a bunch of 'em over the last few laps."

Five caution flags slowed the pace, including a final one that waved when Mason Zeigler's third spin of the evening between turns one and two resulted in contact with Mike Lupfer. That set up a duel to the finish between Stone and seventh-place starter Jason Covert, who had steadily moved into contention. Using primarily the top side, Covert issued several serious challenges over the final circuits, inching closer every lap and delivering a final thrust off the fourth corner that fell a car length short at the checkered flag.