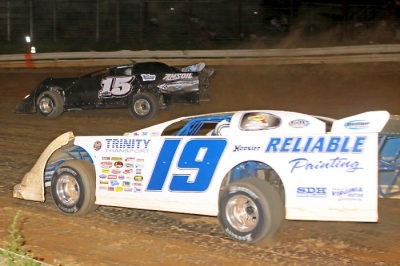 "Our car was good off the trailer and we qualified third and started from the pole, which helps a little bit," Parks said after his flawless performance against the cushion sent him to the winner's circle. "I'm definitely shocked to win it. I knew it was him (Hubbard) because I could see his number on the scoreboard, and (Hubbard's crew chief) Robby Allen was standing in the corner giving him signals.

"You dream about stuff like this happening. I've only won three races, so I'd have to say this one ranks right up there as No. 1."

The two drivers squared off in a lengthy duel, but Parks led every circuit from the pole on a raceable track surface that produced several notable drives through the field, including Jamie Lathroum's back-to-front charge after suffering a flat tire on the fifth lap. Coming from the rear, Lathroum was running fourth when he spun between turns three and four, forcing 13th-place starter Jason Covert to come to a halt. Both drivers were sent to the rear of the field.

Meanwhile, Parks had been running the top groove and holding off the fifth-starting Hubbard's midrace challenges on the low side, and even pulled away to a comfortable lead until the night's sixth caution flag appeared on the 36th lap. That tightened the field, but Parks held firm on the restart despite Hubbard's low-groove dives under the leader. A final caution with two laps remaining gave Hubbard a final shot. Running the low side against Parks' chosen high line, Hubbard ducked under the race leader each lap, but fell short after a last-ditch effort off the final corner.

Dan Stone of Thompson, Pa., ran third most of the race while Vic Coffey of Caledonia, N.Y., was fourth to maintain his second spot in the series points. Lathroum, of Mechanicsville, Md., rounded out the top five. Reigning Port Royal champion Scott Haus of Hamburg, Pa., was sixth.

With a 196-point lead, Hubbard, has all but locked up the series championship with only Friday night's race remaining at Bedford (Pa.) Speedway. Drivers can gain a maximum of 200 points a night.

Notes: Parks drives a Rocket Chassis with a Hershey Racing Engine and sponsorship from Amsoil and Hoosier Tire Mid-Atlantic. ... Fast qualifier Jeff Rine retired from the feature with mechanical woes. ... Jim Yoder of Selinsgrove, Pa., was leading the first heat when he blew a right-rear tire and smacked the wall. ... Darryl Hills of Great Mills, Md., had a flipping accident in his heat race, but he wasn't seriously injured.