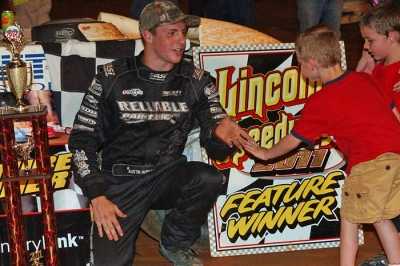 "This car has just been amazing all week," Hubbard said. "The crew and all the rest of us have been working so hard. It’s just nice when something finally pays off because I know I’ve definitely crashed a lot of stuff in my day. ... so it’s nice to be on the other end of the deal."

The polesitting Hubbard, who won the previous night at Williams Grove Speedway, took the checkers ahead of Dan Stone of Thompson, Pa., and Jimmy Mars of Menomonie, Wis., Outside front-row starter Devin Friese of Chambersburg, Pa., was fourth and Jeremy Miller of Gettysburg, Pa., rounded out the top five in the 40-lap main event.

Fast qualifier Rick Eckert of York, Pa., started ninth in the main event but pulled up lame on the first lap, while consolation race winner Jamie Lathroum dropped out on lap 23.

The only other caution appeared on the second lap when Coleby Frye, Kyle Lear and Gregg Satterlee tangled in turn one. The 13th-starting Lear rallied to finish eighth and earn $500 hard charger honors. Seventeen of 24 starters were running at the finish.

Notes: Hubbard's Beitler Enterprises team fields a Rocket Chassis with a Cornett powerplant and sponsorship from Reliable Painting, Salisbury Door & Hardware and Trinity Transport. ... The victory is Hubbard's third overall of the season, all in his last six starts. ... Gary Stuhler won the five-lap dash in track-record time. ... It was a steamy night at the track the the daytime heat index breaking 100 degrees. ... The track timed cars three at a time. ... Duane Harbaugh didn't get a qualifying time when he came to a stop against the frontstretch wall. ... Among drivers failing to make the Super Late Model feature lineup: Harbaugh, Gene Knaub, Scott Lebarron, Alan Sagi and Chad Hollenbeck. .... Knaub won the track's Limited Late Model feature, overtaking Bobby Beard on the 18th lap. ... The Speedweek tour heads to the sixth of seven events Thursday at Port Royal (Pa.) Speedway for a $5,000-to-win event.