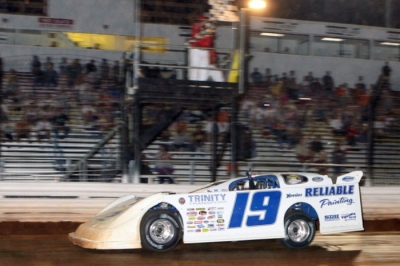 Hubbard, who entered the race with a 62-point lead, set quick time, won his heat race and then collected $5,000 for the feature victory, his first-ever on the 3-year-old miniseries.

“This is like a perfect night," the 19-year-old Hubbard said. "The car was awesome all night."

After overtaking Gary Stuhler of Greencastle, Pa., on the second lap, the third-starting Hubbard worked on Eckert for the next 14 laps before finally pulling off an inside pass as the pair exited the fourth corner with 16 laps down.

Hubbard raced clean and easy to the victory over the final half of the race, feathering his car’s throttle around the half-mile oval.

A three-car race for third dominated race action during the final 20 laps as Duane Harbaugh, Gary Stuhler and Dylan Yoder dueled for the spot lap after lap until Yoder finally sealed the position with five laps to go. Stuhler quickly followed him through and the pair then raced door to door over the final laps.

A caution flag with one to go threatened to mix up the battle at the front but not so in the end as the top five ended up Hubbard over Eckert, Yoder, Stuhler and Jason Covert.