Richards outruns Covert at Knob for two in a row 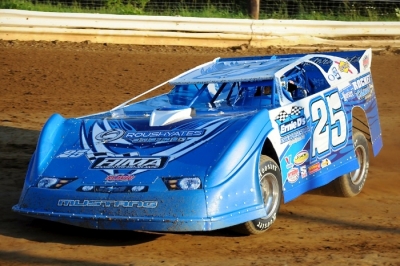 MARKLEYSBURG, Pa. (June 7) — Starting fourth in a 25-car field, Josh Richards nosed underneath Jason Covert to lead the 20th circuit by a nose and continued to victory as the Appalachian Mountain Speedweek presented by CenturyLink made its first-ever appearance at Roaring Knob Motorsports Complex. Richards earned $5,000 for winning the 40-lapper in becoming the first-ever back-to-back winner on the 3-year-old series.

The winning maneuver was completed two turns later when Richards and Covert, still running side by side, approached a slower car exiting the second corner. It appeared neither of the leaders would back down as they quickly closed on the backmarker. Running the low side, Richards was able to pin Covert behind the lapped machine, taking a clear-cut lead for good.

He paced the rest of the distance, pulling away to claim the checkered flag over Covert, the York Haven, Pa., polesitter. Vic Coffey of Caledonia, N.Y., was third while Jamie Lathroum of Mechanicsville, Md., posted his second top-five on the tour and Rick Eckert of York, Pa., finished fifth in the third of seven daily series events.

Richards was able to establish a full straightaway advantage as the final dozen circuits were run under green in a race slowed by three cautions for minor incidents.

"I really enjoy running with these guys on this series, and we did some good, hard racing out there," Richards said. "I know that Jason is gonna give it everything he's got all the time, and that makes competing against him a lot of fun."

His run to the checkered was set up early when he slipped from fourth starting spot into second on the fifth circuit, sliding underneath Coffey. Series points leader Austin Hubbard dropped Coffey another spot a lap later, leaving the Covert-Richards-Hubbard trio as the early leaders. One lap after the winning pass on the 20th circuit, a caution flag appeared. During the slowdown, Hubbard went pitside and returned, but was never again a factor.

Richards and Covert were left to battle for the win, with Coffey also in the hunt. As the race continued, Richards quickly drove away to a full straightaway advantage over Covert, who gave credit to the race winner.

"He was better than us tonight, no doubt," Covert said. "When the race started, I kinda figured we were in trouble and was gonna have a hard time keeping those guys behind us. We were out there running side by side and when we approached that lapped car, neither one of us wanted to back off. I figured we'd just have at it, and see what happened. He got past us in that deal and then drove away from us, so he deserved to win it."