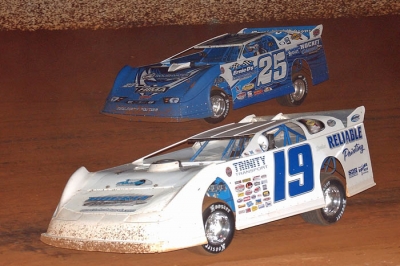 WINCHESTER, Va. (June 5) — Josh Richards took a momentum-fueled swing around the outside of Jeremy Miller with 10 circuits remaining at Winchester Speedway for a $5,000 victory in the second round of the third third annual Appalachian Mountain Speedweek presented by CenturyLink. | Video

Facing a track surface that Shinnston, W.Va., driver called "a bit faster than it usually is when we come here," Richards quickly adjusted to the surface and spent the 40-lap race's earlier stages experimenting with the high side. He was running third behind polesitter and early pacesetter Jeremy Miller of Gettysburg, Pa. and Austin Hubbard of Seaford, Del..

"Most of us were on softer tires due to the quicker surface, but you could really carry momentum and I ran up there kinda hoping to clean off the top groove a little bit," Richards said. "It felt like I was the only one trying to do that. After the first 15 or 20 laps, I was starting to think we didn't have a shot."

That changed on the 29th circuit, not long after Richards had used the bottom to pass Hubbard for the runner-up slot. He engaged Miller in a side-by-side battle for the lead, and then drove around the outside of the race leader to take the point for good en route to his second major victory of the season at the Greg Gunter-promoted speedplant.

Miller, despite breaking a header pipe about 20 laps into the race, held on to finish second over Hubbard, and Pennsylvania drivers D.J. Myers and Rick Eckert.

"There's a good bit of difference in how your motor runs when you break a header on a short, slick racetrack like this one," Miller said. "No excuses, though. As a racer, I'll be the first to give him credit for winning the race."

Notes: Richards piloted an Ernie Davis-owned Rocket Chassis powered by a Roush Yates Engine and sponsored by Ernie D's Enterprises. ... Richards spent the previous day at Chicagoland Speedway, where he finished third in the ARCA Series event after starting on the pole for a 100-laper feature. Richards led the first 11 laps in his Venturini Motorsports No. 25, finishing behind race winner Ty Dillon and Chris Buescher. ... Richards makes his next ARCA start June 17 at Michigan International Speedway. ... He recently agreed to an 11-race deal with Kyle Busch Motorsports to race in the NASCAR Camping World Truck Series starting in July. ... Third-place finisher Austin Hubbard leads Appalachian Mountain Speedweek points. ... The seven-race, seven-day series heads to Roaring Knob Motorsports Complex in Markleysburg, Pa., on Monday.