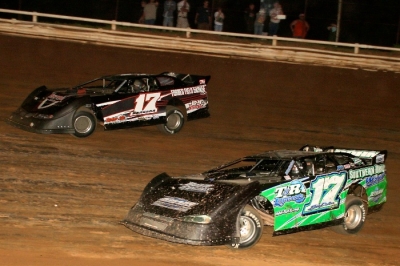 Barbara, of South Park, Pa., ran side-by-side with the fellow No. 17 of Dohm through the last third of the 51-lapper with Dohm inching ahead at the start-finish line to officially lead only the final two laps for a $4,000 victory in the King of the Bullring. | Slideshow

"I'm out of breath," were Dohm's first words in victory lane after the battle that saw him frequently ahead on the backstretch in his low groove while Barbara's high line would sweep him back ahead at the flagstand.

Barbara settled for second-place at the high-speed quarter-mile oval while Paul Wilmoth of Clarksburg, W.Va., was third. Tim Dohm of Cross Lanes, father of the winner, was fourth and Robbie Scott of Shinnston, W.Va., rounded out the top five. Mike Benedum of Bristol, W.Va., started outside the front row but ended up 14th.

Jared Hawkins of Fairmont, W.Va., entered the race leading UFO points, but after ralling into the top 10 from his 18th starting spot, he ran into problems on lap 23. Devin Friese of Chambersburg, Pa., posted a seventh-place finish, good enough to push him into the points lead.

Jared's brother Jacob Hawkins ran among the leaders the first half of the race, but a tangle with Wilmoth on the frontstretch on lap 25 ended his race.

Notes: Dohm's Tracy Seymour-owned Rocket Chassis is sponsored by T&R Logging and Southern Ohio Wood. ... The event was sponsored by Dodd's Sporting Goods. ... With storms approaching, the feature hit the track at 9:33 p.m. ... Lightning appeared in the sky through the second half of the race and a heavy downpour hit just moments after the checkered flag fell. ... Among drivers failing to make the feature lineup: Chuck Harper, Shane Hitt, Rick Williams, Gary Dalton, Danny Mitchell, Tony Musolino Jr., Greg Baumberger and K.C. Burdette. ... Next up for UFO competitors is twin 28-lappers on June 11 at Pittsburgh's Pennsylvania Motor Speedway.