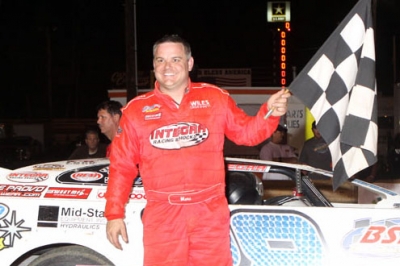 HAGERSTOWN, Md. (June 4) — The first race of the Appalachian Mountain Speedweek got off to a roaring start — especially if you're Jimmy Mars.

The 39-year-old driver from Menomonie, Wis., made a dramatic outside move in the late stages of Saturday's miniseries opener at Hagerstown Speedway for a $5,000 victory to open the seven-race stretch. Mars, who earned his first-ever victory at Hagerstown, held the third spot heading for the white flag but disposed of Austin Hubbard and then leader Steve Shaver, taking command with just over a half-lap remaining. | Slideshow

“We’ve done well in heat races here before, got second and other top-fives, but to get a win at a track like this with all the history behind it is pretty cool,” said Mars, who started 11th and rebounded from a penalty in prelims. “We got our hand slapped in the heat race for jumping and got put back, but we came back and won.”

The fast-qualifying Shaver, Hubbard and Mars were in a tight pack in the final laps, but Mars had his eye on the outside groove.

“I thought I was good on the outside the whole time,” Mars said. “The marbles get blown away on the last restart.”

The winning move startled Hubbard, the Seaford, Del., driver who also drove past Shaver on the final lap to finish second.

“I was so concentrated on looking at Shaver and figuring out what I needed to do and all of a sudden, Mars turned right on me on the last lap and that’s never good," Hubbard said. "Honestly I thought the track was awesome tonight.ï¿½ When you get the track done like this and everybody can move around and run what lane you want and carry speed, that’s what makes good races.”

Shaver, of Vienna, W.Va., wondered if his tire choice didn't bite him.

“I think (Mars's) tire got better on the upper groove the last few laps," the third-place finisher said. "I tried to move down a little bit and I think it actually hurt me. Third place here is pretty good. I don’t normally run that good here at Hagerstown, so we’re tickled to death. Leading like that, I would like to have hung on for the win.”

Eckert pulled out to the early lead with Shaver pressuring him before a lap-eight caution involving Dylan Yoder and Jim Bernheisel. When the race went back to green, Shaver was in command and the ninth-starting Hubbard was up to third before Duane Harbaugh's shredded tire drew a lap-14 yellow flag.

With Shaver out front, Hubbard climbed past Eckert on lap 17 and Mars was working his way to the front by the halfway mark. The final yellow for Jeremy Miller on the 23rd lap set up the three-car dash to the finish.

In the final 15-lap stretch, Shaver held off a few challenges from Hubbard while Mars joined them as they edged away from Coffey. Further back, Lathroum got stronger and took fifth from Dan Stone and slipped by Coffey a few laps later.

With two laps remaining, the front three were bumper to bumper as Hubbard looked inside Shaver while Mars came to the line in second at the white flag. Suddenly Shaver was stuck in the middle of turn two as Hubbard ducked inside and Mars was squeezed against the fence for a three-wide exit. Mars won the race off the turn and headed towards the final turns and the checkered ahead of Hubbard and Shaver.

Correction: Fixes that Keith Jackson started as a provisional starter.