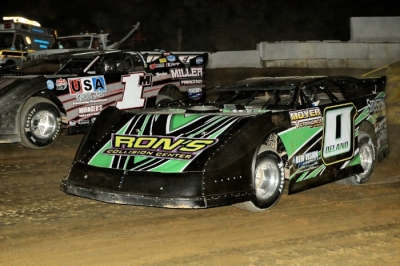 Delano started on the pole of both features and led the first lap of both, but Miller led the rest of the way in the first 25-lapper for his third career series victory. Delano, who faded to 11th in the opening feature, rebounded in the nightcap to lead all 25 laps and corral his first-ever UFO triumph. | Slideshow

In the first feature, Miller took the lead on an early restart, survived another caution period that saw fourth-running Jason Covert head to the pits with a flat tire, then led the rest of the way. J.T. Spence of Winchester, Va., advanced from his seventh starting spot for second while front-row starter Matt Parks of Three Springs, Pa., was third. Devin Friese of Chambersburg, Pa., advanced seven position to finish fourth.

For the second feature, Delano got the pole again when Miller drew an 11-car inversion, and he made the most of his starting spot on the second go around. Nick Dickson of Lewistown, Pa., put the head on Delano's new Victory Circle Chassis much of the way, but Delano held on for the victory. Austin Hubbard of Seaford, Del., briefly took second from Dickson late in the race but settled for third while Gregg Satterlee of Rochester Mills, Pa., was fourth. Dylan Yoder of Selinsgrove, Pa., posted back-to-back fifth-place finishes.