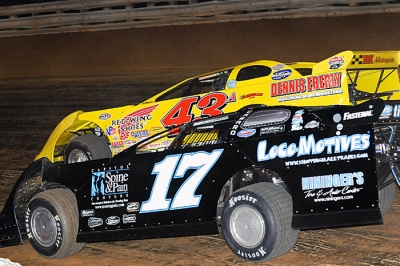 Jason Covert (43a) overtakes Gary Stuhler (17) on the fourth lap at Hagerstown. (wrtspeedwerx.com)

HAGERSTOWN, Md. (May 28) — Two-time series champion Jason Covert of York Haven, Pa., ended his longest winless stretch on the Three State Flyers circuit Saturday with a victory in the 16th annual Richard "Boney" Bonebrake Tribute at Hagerstown Speedway. Covert, who took the lead from Gary Stuhler on the fourth lap, earned $3,000 for the 35-lap victory at the half-mile oval.

Austin Hubbard of Seaford, Del., finished second with J.T. Spence of Winchester, Va., in third. Fourteenth-starting Josh Richards of Shinnston, W.Va., was fourth in the Ernie Davis-owned No. 25 and Stuhler rounded out the top five finishers. Rick Eckert of York, Pa., earned the Round Hill Service Hard Charger award for his 25th-to-eighth charge.

“What an honor to race with Gary and with Josh, Austin, Rick,” said Covert, the winningest series driver whose last tour victory came 11 months earlier at Hagerstown. “They’re the best in the business.”

Stuhler and Covert started on the front row in the main event with Stuhler edging ahead before a first-lap caution for a turn-four incident involving Frankie Plessinger, Jamie Lathroum, Roy Deese Jr. and Rick Eckert. Deese and Eckert able to restart on the rear.

With Stuhler restarting out front, Covert went to work in the high groove and took command after Stuhler had three laps out front. Hubbard dropped Stuhler to third on the seventh lap while Spence and Jerry Bard were heading toward the front.

Covert and Hubbard pulled away from the field and had a four-second margin on Stuhler after 15 laps. Lapped traffic came into play on the 21st circuit and the frontrunners worked through the slower cars.

A lap-31 caution reset the field, and Covert pulled away over the final few laps for a comfortable victory.

Notes: Covert's Barry Klinedinst-owned Rocket Chassis is powered by a Hershey's Racing Engine and sponsored by Red Wing Shoes and Pre-Mach Inc. Fabricators & Machinists. ... Covert's daughter serves in the Air Force overseas, and he was sure to remember service members on Memorial Day weekend. "This takes on a whole new meaning for Memorial Day,” Covert said in victory lane. "I want to thank any of the veterans that did that for us so I get to enjoy a little bit of the freedoms that most of the world doesn’t have.” ... Jerry Bard, last week's winner at Hagerstown, was sixth. ... Five different drivers have won Hagerstown's five Super Late Model events in 2011. ... Among drivers failing to make the Three State Flyers lineup: Dan Stone, Mike Lupfer, Brent Smith, Tyler Hershey, Duane Harbaugh, Keith Jackson and Mason Zeigler. ... Justin Weaver led all 20 laps of Hagerstown's sportsman feature. ... Next week Hagerstown hosts the opening night of the seven-race Appalachian Mountain Speedweek. The feature pays $5,000 to the winner.