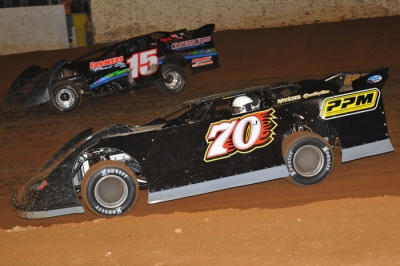 WINCHESTER, Va. (May 27) — D.J. Myers of Greencastle, Pa., rallied from his ninth starting spot Friday at Winchester Speedway for a Three State Flyers victory at Winchester Speedway. Myers, who took the lead from hometown driver J.T. Spence after a lap-25 restart, earned $3,000 as he notched his third Super Late Model victory overall in eight days. | Slideshow

Spence settled for second in the 35-lapper with Jeremy Miller of Gettysburg, Pa., in third. Gary Stuhler of Greencastle, Pa., and Tommy Armel of Winchester rounded out the top five as the track survived threatening rain. Jonathan DeHaven ran second the first 18 laps but faded to seventh.

The victory was the third of his career on the Three State Flyers circuit, moving him into second on the all-time list behind Jason Covert of York Haven, Pa., who finished eighth.