Jared Hawkins makes it 2-for-2 on UFO circuit 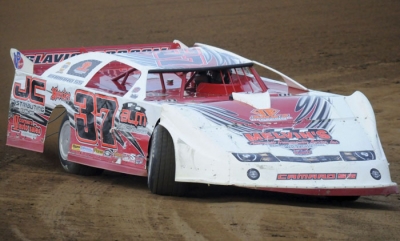 The victory was marred by a last-lap incident that sent track photographer Howie Balis to the hospital with what preliminary reports said were two broken legs. Balis was struck by the spinning car of Steve Gibney in the infield as the checkers fell. He was airlifted to a Johnstown, Pa., hospital. | Slideshow

Hawkins, in his first season in a Bobby Lake Motorsports-owned Rocket Chassis, led all 38 laps for a $3,008 payday at the picturesque half-mile oval. Jason Covert of York Haven, Pa., was second followed by Jamie Lathroum of Mechanicsville, Md., Devin Friese of Chambersburg, Pa., and 21st-starting Derek Byler of Belleville, Pa.

Hawkins grabbed the lead from Covert after an early caution put him on the outside for the restart.

"I was a little too cautious on that first start and Covert got around me," Hawkins said, ""so on the next restart I think the outside was a little better because it was cleaned off more and I got the jump on him and after that I chose the outside on every restart."

The race was slowed seven times — six times for yellow flags, and once for a red flag on the second lap for a 13-car pileup on the frontstretch. Among drivers collected in the melee were Russ King, Chuck Clise, Dylan Yoder, Shawn Claar, Greg Fetters and the winner's brother, Jacob Hawkins.

After that, Covert stayed with Jared Hawkins for the first 10 laps until the leader began to pull away. Meanwhile, Lathroum began to pressure Covert for the second spot.

"I felt him once," Covert said, ""but the track was so narrow tonight that you had to be so much better to pass a guy, I was just trying to hang on there so I didn’t give up another spot."

Tire strategy was key and the winner played it safe in the final laps.

"Normally when a track looks like that, we probably would have just ran a (Hoosier) 1300 (compound), but we went a little harder," Hawkins said. "It actually did kill the right rear, so I did have to start conserving there the last five laps."

Said Covert: "I think he was a little stiffer than I was and I was hanging on for about 15 or 20 laps, but he deserved it. His car was better and he did a great job driving."

Notes: Hawkins is sponsored by JC Distributing, Melvin’s Automatic Transmission Service and D&M Truck Repair. ... He's 2-for-2 with UFO this season after a season-opening victory at Tyler County Speedway in Middlebourne, W.Va. ... UFO regular Keith Barbara of South Park, Pa., was running fourth when he was collected by Thunder Valley regular John Britsky on the 35th lap; Britsky was penalized to the rear of the field but went pitside. ... Reigning UFO champ Chad McClellan of Stoystown, Pa., was sixth. ... UFO competitors head to Hesston (Pa.) Speedway on May 29 for a pair of $2,000-to-win features.