Arthur earns $2,000 with victory at Cumberland 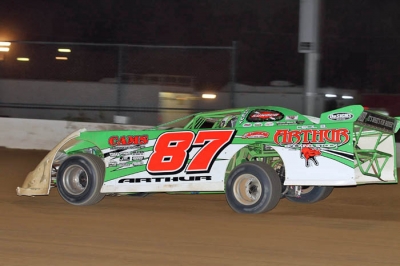 Arthur grabbed the lead early and never relinquished it in the 30-lap feature that paid $2,000 and helped opened the 5/8-mile oval's season after a month of rainouts. | Slideshow

Arthur started on the outside front row for the main event and took off with the lead over Rick Singleton, D.J. Troutman and polesitter Bo Feathers. Arthur led Singleton throughout the race, including a handful of cautions to win by 10 lengths.

Behind Singleton in second, Troutman was third after getting around Feathers on lap 13. Matt Sponaugle finished fourth after starting ninth and Kyle Merkel grabbed the fifth spot.

Sponaugle and Merkel got around Feathers, who ended up sixth, on lap 22. Sponaugle took fourth from Merkel on the following lap. Matt Cosner and Sean Merkel finished seventh and eighth. Booper Bare, who started 18th, finished ninth and Matt Howsare was 10th.