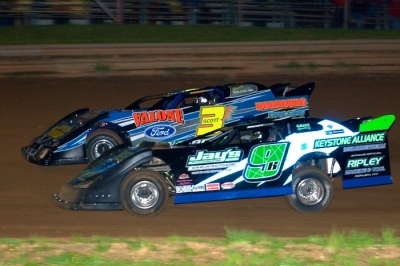 FRANKLIN, Pa. (May 6) — Mike Knight of Ripley, N.Y., pulled away from a mid-race duel with polesitter David Scott of Garland, Pa., at Tri-City Speedway to win the season opener on the Northern Tier United Late Model Series.

Knight earned $2,000 for the 25-lap victory, the third of his career on the tour that made its return to Tri-City for the first time since 2009. | Slideshow

Dick Barton of Ashville, N.Y., rallied from his 11th starting spot to finish second, while Russ King of Bristolville, Ohio, made a late charge to finish third. Scott settled for fourth ahead of hometown driver Matt Lux, who started on the front row.

Knight took the second spot from Lux on the 10th lap and began a side-by-side duel with Scott. Knight edged ahead by a half-length on the 12th lap, with Scott powering back ahead down the backstretch. But Knight took over for good as the frontrunners exited turn four to complete the 13th lap.

At the finish, Knight took the checkers more than three seconds ahead of Barton.